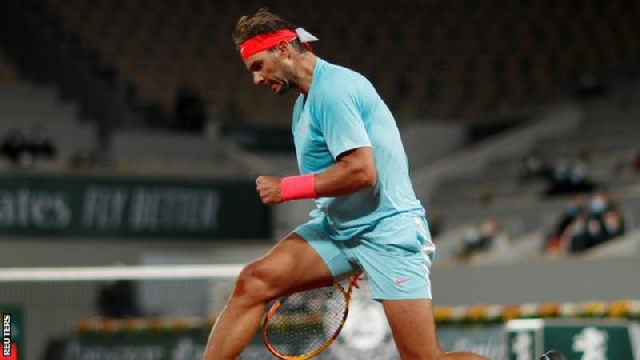 The big-hitting Italian broke Nadal in the opening set and looked to serve out before the Spanish 12-time champion hit back and won the tie-break.

He will now face Diego Schwartzman.

The Argentine defeated Nadal in Rome last month, but the Spaniard has gone on to win the title on every occasion after reaching the last four at Roland Garros.

The late finish was due to Tuesday’s packed schedule on Philippe Chatrier, which included the five-hour epic between Schwartzman and Dominic Thiem.

Nadal thanked the sparse crowd that remained to watch his match and paid tribute to his 19-year-old opponent.

“Sinner is a very young talent with a lot of power and great shots,” he said. “For two sets it was tough and I was lucky to break him back after going 6-5 behind in the opening set.

“The conditions were difficult. In this cold, the speed was not there.

“Now I have two days, or one-and-a-half days, to practise and recover.”Talented Sinner tests Nadal

This was the second seed’s stiffest test to date. Sinner’s ascent over the past year has been rapid – he has gone from 324 in the world to now 75, which will further rise after this tournament.

Last year, at the age of 18, he became the youngest winner of ATP NextGen title and followed that by reaching the second round of this year’s Australian Open.

There was nothing to suggest he would go on such a long run at Roland Garros, having been knocked out in the last 16 of the preceding tournament, the Rome Masters.

But in Paris he has flourished, brushing aside 11th seed David Goffin, Federico Coria and US Open finalist Alexander Zverev to reach this stage.

Nadal, like Sinner’s previous opponents, seemed to be overawed by the velocity of the Italian’s groundstrokes early in the match.

The Spaniard was on the backfoot and was broken to trail 6-5, having also faced break point in the fifth game. But as Sinner looked to serve out for the set mistakes surfaced, allowing Nadal to break back and then take the tie-break.

Sinner continued to trouble his more decorated opponent, and broke the veteran again with a brilliant winner in the fourth game of the second set. But his joy was short-lived as Nadal struck back again immediately before breaking the Italian again en route to tying up the second set.

By this stage Nadal was beginning to read Sinner’s game, while the teenager’s level began to drop. The Spaniard sealed his opponent’s fate with a smash.

With a temperature in a nagging wind of about 10C, Nadal’s coach Carlos Moya looked on with his ski jacket zipped up to his chin.

A couple of hundred others who stayed to watch opted for woolly hats and scarves, or improvised with towels wrapped tightly around their legs and shoulders.

It is a French Open like no other, but Nadal has still won all 15 sets he has played so far.

Sinner was not the first to discover you can play very well on Philippe Chatrier and still have nothing to show from an encounter with Nadal.

1.25am is a ridiculous time to finish at a tournament without an official night session, but at least Nadal has two days off before the semi-final.