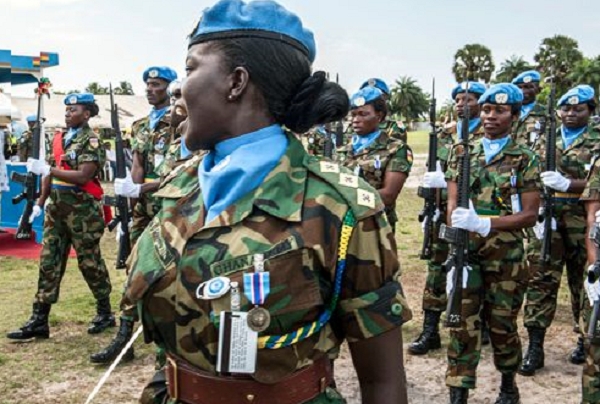 Ghana has achieved the United Nation’s (UN) target of 15 per cent deployment of women to peacekeeping missions around the world, the Ghana Armed Forces (GAF) has disclosed.

This was disclosed at the ongoing high level gender conference spearheaded by the leadership of the armed forces under the theme: ‘Guaranteeing equal opportunities in the Ghana Armed Forces’ on Monday, 12 October 2020.

The meeting, which is taking place in Accra, is in furtherance of Ghana’s international commitment to ensuring gender equality.

Speaking at the meeting, Chief of Defence Staff Lieutenant General Obed Akwa noted that a number of reforms are ongoing to open up more opportunities to women in the military.

“We have seen an increase in the intake of women to approximately 17 per cent and not only have the numbers increased but also we continue to see them employed in ever-expanding roles. For the first time, we have two female Generals”, he said.

“We have also, recently, and that is in 2018, commissioned five female officers into the Infantry Corps, which until recently, was the preserve of only men. In the ranks, a good number of females are employed in trades and capacities initially preserved for men such as colour and signs and their related colour escort,” Lieutenant General Akwa said.

He also explained that: “We’ve trained them, physical training instructors, some of them attend drill and duty courses and some are sergeant majors or service equivalents among others. In the area of peacekeeping, Ghana remains one of the few troop-contributing countries to deploy between 13 and 15 per cent of females in peacekeeping missions around the world.

“Fifteen per cent is the UN target for the year 2028, but we, in Ghana, we’ve already achieved that.

“In all aspects, our women are, indeed, acquitting themselves creditably. Last year, 2019, Command gave all the necessary support to our females to celebrate their 60th anniversary in grand style. This is a huge feather in the cup of the Ghana Armed Forces. In talking about female appointments and their achievements, I cannot leave out our first-ever and, in fact, my first-ever Gender Policy Advisor in the person of Commander Veronica Adzo Arhin,” the CDS said.