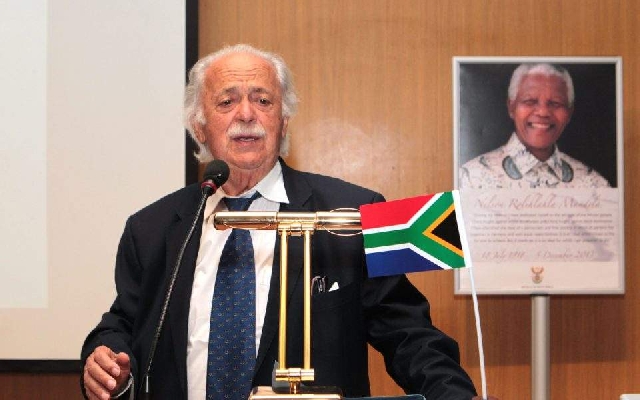 Bizos died of natural causes at the age of 92 peacefully at his home with his family in attendance, a statement released by the family said.

Bizos, a renowned human rights lawyer and a close friend of Nelson Mandela, represented families of apartheid atrocities and was a lifelong campaigner against the use of the death penalty.

President Cyril Ramaphosa announced his death, saying Bizos the news was “very sad for us as a country.”   “An incisive legal mind and architect of our Constitution, he contributed immensely to our democracy,” he said in a tweet.

“Ntate Bizos was always available to support our events and to lend an ear to our challenges,” Sello Hatang, foundation Chief executive of the Nelson Mandela Foundation said in a statement.

“He became like a well-loved uncle to us. We were in awe of him, yet he always engaged us with humility, affection, and respect.”

The foundation added that Bizos’ friendship with Mandela spanned more than seven decades, and in the last years of Mandela’s life, they were often found “catching up and sharing memories.”

During Mandela’s incarceration, Bizos had played a “critical role,” both “professionally and as a family friend.”

“He looked after my family, after my children, advised my children and he made me feel that although I’m in prison, my affairs are being looked after by a man I know and I trust,” the Mandela Foundation statement said quoting Nelson.

Bizos studied law with Mandela and fellow civil rights activist, Oliver Tambo, at Witwatersrand University in Johannesburg. They became friends and worked together as young advocates.

Bizos was Mandela’s lawyer when he was put on trial in 1964, accused of sabotage and facing the death penalty. He was sentenced to life in prison instead, and served 27 years.

The lawyer played a key role in the release of Mandela in 1990.

The Afrikaner saw there was no future in apartheid, and knew they couldn’t “face the world forever”, he told CNN in an emotional interview in 2013.

Mandela eventually earned the respect of his jailers, said Bizos. He introduced Bizos to his “guard of honour” on Robben Island, the 12 white Afrikaner wardens who accompanied him.

“He wanted to persuade the people of South Africa as a whole that they did not have to be afraid of fundamental change in the country,” Bizos said.

After Mandela’s release, Bizos served on the constitutional committee of the African National Congress, helping to write the country’s new constitution.

“[He asked us to] draw a constitution that will be good for our country, and not only for the good of our organization. We tried to do that and I think we succeeded,” Bizos said.