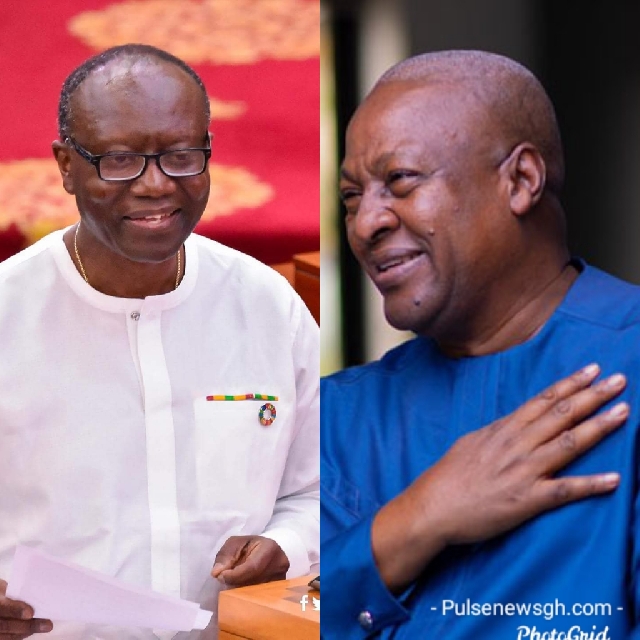 Finance Minister Ken Ofori-Atta has said the banking sector clean-up exercise is costing the Ghanaian taxpayer at total of GH¢21 billion, which he has described as a “financial enslavement legacy” from the erstwhile Mahama administration.

A total of nine local banks were collapsed by the Bank of Ghana during the clean-up exercise.

Delivering the 2020 mid-year budget to Parliament on Thursday, 23 July 2020, Mr Ofori-Atta defended the Akufo-Addo government’s intervention in the financial sector, saying it was necessary.

“Mr. Speaker, as stated earlier, the outbreak of the pandemic is having a negative impact on the financial sector here in Ghana and across the world. All over the world, central banks are being relied upon by governments to find the liquidity to tackle the socio-economic difficulties unleashed by the pandemic”, he said.

The Bank of Ghana, he noted, “has stepped up to the challenge and announced various policy measures to help support the economy and financial institutions in order to cushion the adverse impact of COVID-19 on the economy. It is important to stress that this has been possible because of the responsible and competent management of both the fiscal and monetary space since 2017”.

“As a result of mismanagement, depositors’ funds had been locked up with no hope that these depositors could access their own funds”, he noted, adding: “The authorities, with foresight and appreciation of the role of the banking/financial sector to any economy, especially to oil the engine of the private sector, introduced painful but unavoidable reforms to clean-up the mess inherited from the previous government”.

He said the “timely intervention under this administration resulted in the saving of these locked-up funds in failed banks”.

“This was a sobering but necessary action that in total is costing the state in excess of GH¢21 billion of taxpayers’ funds”, he revealed.

He said “these are funds that could have been otherwise deployed to support the development agenda of the government”.

“Let it be said that a serious government, as we are, desperate as we were to fix a broken economy as it was and fund our own programmes, as promised, and as patriotic as we are, had absolutely no thoughts, no time, no energy or the luxury to conspire with the central bank to deliberately cause the downfall of Ghanaian banks that were already in zombie state, fatally insolvent, by the time we took office”.

“What we did was to merge those that had failed, save those that could be saved with the view to building a strong and viable financial sector with integrity”, he said.

In his view, “What the President did, which is unusual in banking practice, globally, was to go the extra mile to save the funds of all depositors of failed banks”.

“Let no one stand on the staple and proclaim untruths and let mature Ghanaians be quick to listen, slow to speak and slow to anger – James 2:10”, Mr Ofori-Atta in reference to critics of the clean-up exercise.

“Mr. Speaker, as at the end of first quarter 2020, a total amount of GH¢13.6 billion (3.5 percent of GDP) has been spent on the resolution of failed banks, Specialised Deposit-taking Institutions (SDIs), Micro Finance Institutions (MFIs), the establishment of the Consolidated Bank Ghana Limited (CBG), as well as the capitalisation of the Ghana Amalgamated Trust (GAT)”, he said.

Additionally, Mr Ofori-Atta said with the President’s directives to “fully pay all depositors whose funds were locked up with the failed SDIs and MFIs, an amount of GH¢5 billion was spent”, noting: “This brings the total expenditure on financial sector interventions as of June 2020 to GH¢18.6 billion (4.8 percent of GDP)”.

“Government has also committed an amount of GH¢3.1 billion (0.78 percent of GDP) towards supporting investors in failed asset management companies regulated by the Securities and Exchange Commission (SEC)”.

“Mr. Speaker, this would bring the overall total Government expenditure for the failed financial institutions to GH¢21.60 billion (5.6 percent of GDP). A legacy of financial enslavement from the previous administration”.