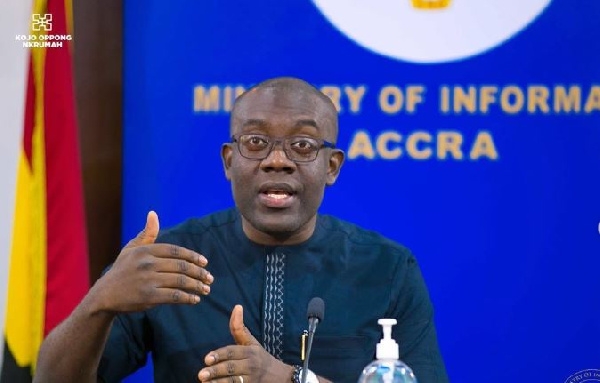 Information Minister Kojo Oppong Nkrumah has debunked assertions that Ghana is back to being a Highly Indebted Poor Country (HIPC).

Speaking at the Nation Building Updates on Tuesday, 26 October 2020 in Accra, Mr Nkrumah noted that as the country goes into the polls in December, some persons will seek to spread a lot of falsehood.

He said: “There are suggestions being spread, particularly on social media, that Ghana has been declared HIPC again and I am sure you would have noticed that a lot of persons are sharing materials on social media that the IMF or World Bank has declared Ghana HIPC or listed Ghana as one of the HIPC countries and it is a suggestion that the economy is not as good a shape that we claim it is.

“For the avoidance of doubt and, because we have also mentioned that we are aware that some persons, in the weeks ahead of the elections, will seek to spread a lot of false information and fake news, it is important to quickly respond to it right here and right now.

“Categorically, we say to you it is not true that Ghana has been declared HIPC or has been added to the list of HIPC countries”.

On Monday, 26 October 2020, the flagbearer of the main opposition National Democratic Congress (NDC), Mr John Dramani Mahama, who is seeking re-election, said Ghana was back to HIPC when he spoke to some professionals in Accra.

According to Mr Mahama, the International Monetary Fund (IMF) forecast Ghana’s current rate of borrowing and debt at 76.7 per cent debt-to-GDP ratio.

This, according to Mr Mahama, has brought the nation back to the days of HIPC.

Speaking at the La Palm Royal Beach Hotel, Mr Mahama noted that it is incorrect that he left President Akufo-Addo with nothing when he handed over power on 7 January 2017.

He continued: “As for the 2020 growth, the economy that was sold to us as resilient and capable of withstanding shocks for at least three months without any external intervention could not stay afloat without IMF support for more than three weeks.

“Even worse, the rate of borrowing by this government has dazed many observers.

“The IMF in its sub-Saharan African Regional Economic Outlook forecast the current rate of borrowing and debt at a frightening 76.7% debt-to-GDP ratio.

“Ladies and gentlemen, unfortunately, Ghana is back to HIPC status under Nana Akufo-Addo and Ken Ofori-Atta administration.”

HIPC is a group of developing countries with high levels of poverty and debt overhang which are eligible for special assistance from the IMF and the World Bank.

Ghana completed the programme and had her external debt cancelled and no longer qualifies to be part of HIPC.