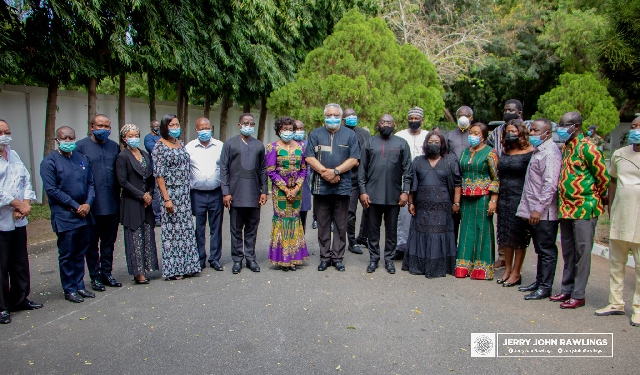 Former President Jerry John Rawlings, the Agbotui and allied families have been receiving visitors and messages of commiseration following the death, last Thursday, of Madam Victoria Agbotui, mother of the former President.

On Wednesday, a large government delegation led by Vice President Alhaji Mahamudu Bawumia, called on the bereaved family to commiserate with them over the loss.

Vice-President Bawumia in sympathising with the former President noted that though he knew him as a tough man, the loss of a mother was a difficult situation for every offspring.

Earlier on Friday, September 25, a high-powered delegation from the National Democratic Congress led by the party’s flagbearer, former President John Dramani Mahama, called on the former President and his family to commiserate with them over the loss of Madam Agbotui.

Former President Mahama, in paying tribute to Madam Agbotui, said Mama was always available to give wise counsel whenever the opportunity availed itself.

He said though Mama was a centenarian, “she was the kind of person one would assume would live forever.”

Sheikh Sharabatu, in mourning the loss of Madam Agbotui, said the loss reminded him of the significant contributions his son, former President Rawlings had made to the development and unity not only of the Muslim community but the country at large.

The Chief Imam in consoling the bereaved said Madam Agbotui was in a good place and urged the family to remain strong.

On Monday, a delegation from the NDC parliamentary caucus led by Minority leader Haruna Iddrisu and Second Deputy Speaker Alban Bagbin, also called on the former President and his family to express their condolences.

The Moroccan Ambassador to Ghana, Madam Imane Quaadil also called on the former President and his family on Wednesday to express the condolences of the Kingdom of Morocco to the bereaved family.

Ambassador Daniel Abodakpi, Stoolfather of Anlo State, expressed the gratitude of the former President and his family for the show of solidarity from the Kingdom of Morocco and gave the ambassador details of the funeral.

The Agbotui and allied families have meanwhile confirmed Saturday, October 24 as the date of the funeral.

There will be a burial service at the Forecourt of the State House after which the body will be conveyed to Dzelukope for interment.