Grealish snub proves Southgate is no longer the man for England 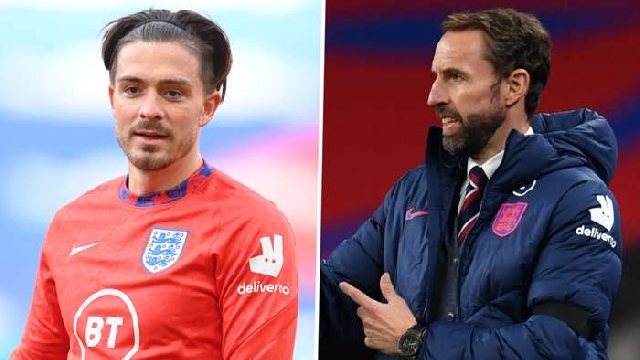 It was surely a first in the history of the England team; a man-of-the-match full debutant failing to get a single minute on the pitch three days later in the very next game.

Gareth Southgate’s relationship with Jack Grealish has moved on from suspect to faintly ridiculous in the last week. It has moved from glaring squad omissions for spurious reasons to weirdly evasive answers to questions concerning the Aston Villa captain’s performance in an England shirt.

Southgate seemed desperate to talk about anything else after the 3-0 victory over Wales, most notably the qualities of Grealish’s main rival for a spot, Mason Mount. It was a baffling next step in a relationship that has always been uneasy.

First there was the explanation that Southgate couldn’t pick Grealish until he had Premier League experience, a condition given despite the fact Mount had received a call-up while on loan at Derby County.

Then there was the mysterious overlooking of Grealish during a purple patch of form in autumn 2019. Then came the strange explanation there was too much competition from Jadon Sancho, Mason Greenwood, and Marcus Rashford, players who could scarcely be more different technically, tactically, and positionally from the Villa No.10.

Next came the bizarre, unprompted reference to Villa fans ‘who have never forgiven me for leaving for Middlesbrough’ when discussing Grealish’s continued absence from the squad.

It seems Grealish is incapable of changing Southgate’s mind, no matter how well he plays for club or country, with the England manager unshakeable in his belief his players must diligently conform to a functional battle plan.

And while this might appear to be an isolated incident, his preference for Mount over Grealish acutely symbolises a wider problem. When the moment calls for idiosyncrasy, Southgate chooses pragmatism; as the England squad becomes progressive, Southgate retreats to conservatism.

The team selection for the fortunate 2-1 victory over Belgium felt like that of a manager yearning for the days when he managed an underdog, when expectations were so low there was a unifying – even inspiring – quality to a clumpy midfield, to cobbling together unlikely lads, to picking three right-backs and playing none of them at right-back.

No wonder he wants to recapture that energy. His England at the 2018 World Cup was a joyous surprise, a makeshift team of lovable outsiders who brought the nation together precisely because England so clearly lacked the technical ability of their rivals. It was perfect for the moment, but not anymore.

Before we consider what should come next for the senior team, it is important to acknowledge that Southgate has been a spectacular success. Nobody should underestimate the magnitude of his achievement in de-toxifying England, in creating a likeable and low-pressure national setup after decades of stress, pain, and a seething relationship with the tabloid press.

The forward-facing England we see today is all of Southgate’s doing and a remarkable triumph considering Sven Goran Eriksson’s celebrity, Steve McClaren’s brolly, Fabio Capello’s noxious fear, and Roy Hodgson’s Iceland moment – the nadir from which Southgate, via the Sam Allardyce scandal, has revived the nation.

The England team of 2020 is unrecognisable from the one of 2018, or at least it should be. In Russia, England were caught between eras and on the precipice of the first wave of teenagers graduating through St George’s Park, the national football centre opened in 2012 as the centrepiece of a new development strategy at the FA.

That strategy has been extraordinarily successful, so much so that the current senior manager is no longer the right fit.

In 2017, England won the World Cup or European Championship at Under-17, U19 and U20 levels. Three years later, these players are graduating at breakneck speed to become the fulcrum of a new-look, newly-progressive England team.

Sancho, Raheem Sterling, Harry Kane, Trent Alexander-Arnold, Jordan Henderson, Rashford: nobody would doubt that all six of these players could be prominent squad members of the best, most attacking clubs in Europe.

When you add to this the newly emerging Phil Foden, Greenwood, Bukayo Saka, Grealish, and Dominic Calvert-Lewin, one has to start thinking about that most hated, most cursed of phrases: a Golden Generation.

And that is why the perception of Southgate’s England has nose-dived over the past 12 months, why dreary 0-0 draws with Denmark aren’t simply shrugged off as meaningless results in the bigger picture.

There is a growing sense, quite rightly, that England is ready for a modern tactician willing to play expansive, vertical possession football in the German model that dominates the European game.

Because a nation with greater ambition would not just pick Grealish over Mount, but build the entire team around him, offering the sort of maverick playmaker qualities that are so often at the heart of the world’s most successful teams.

By contrast, Mount – though talented – is most liked for being a willing runner; a diligent presser; a listener. He is the conservative choice of a manager fearing what he will lose rather than dreaming of what could be gained.

Picking him over Grealish communicates the same logic that underpins the selection of a stodgy double axis in midfield, that insists on a three-man defence, that refuses to trust the sort of high defensive line and hard pressing that would unleash the best of Sancho, Sterling, and Alexander-Arnold.

Imagine Pep Guardiola in the England job with Henderson in the Fernandinho role; Grealish and Foden dove-tailing like Kevin De Bruyne and David Silva; Alexander-Arnold bursting down the right; Saka an inverted full-back filling in the gaps.

The Man City manager would not be interested in the role, of course, but that calibre – or at least that type of vision – is what a generation of extraordinarily gifted footballers needs and deserves.

Southgate has been superb for England, but increasingly it looks as though the FA would be wise to move him on after next summer’s European Championship finals.

Perhaps then Grealish would get his chance.