Greece struggles to bring migrants into temporary camp after fire 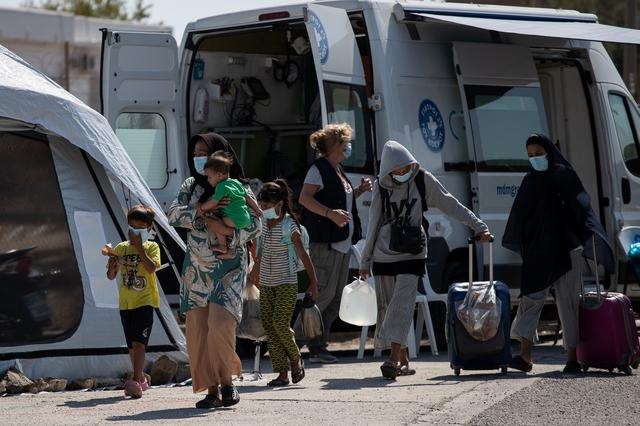 Greek authorities were struggling on Wednesday to move thousands of migrants made homeless by a blaze at an overcrowded camp into new tents, while fears grew over a coronavirus outbreak on the island of Lesbos.

More than 12,000 people, mostly refugees from Afghanistan, Africa and Syria, were left without shelter, proper sanitation or access to food and water by the fire that tore a week ago through Moria, Greece’s biggest migrant camp.

No one was killed or hurt in the fire, which broke out after quarantine measures were imposed following the discovery of COVID-19 cases. The authorities say a new temporary tent camp at Kara Tepe near the island’s port of Mytilene is ready to host at least 5,000 people, but so far only 1,200 have moved in.

“They are still reluctant,” said a police official on condition of anonymity. “Negotiations are ongoing.”

Migration Minister Notis Mitarachi suggested the authorities would soon run out of patience with those who do not move.

“We will continue for some more days in good faith and communication. After that point, if there are any who react violently, the police will arrest them,” Mitarachi said.

“We expect that in the coming days we will have completed the transfer of migrants inside the camp. It is nearly double the space of Moria which allows better conditions … but there will be more security measures,” he told Skai radio.

Authorities have distributed flyers and sent text messages to migrants trying to convince them to move. One official said migrants hoped to be allowed to leave the island and believed living conditions in the new camp would be as bad as Moria.

Those entering the new camp were being tested for COVID-19 and so far 35 were found positive. Residents were afraid a coronavirus outbreak was looming with thousands of people sleeping rough and untested.

Four migrants appeared before a prosecutor on Wednesday over the Moria blaze, from among six arrested the previous day.

Another blaze, which broke out overnight near another migrant camp on the island of Samos, was put under control and three people were detained.

The Moria inferno has put the migrant issue back on the European agenda. European Union Council President Charles Michel visited Lesbos and promised solidarity. Germany said it could take in up to 1,500 people stranded by the fire.

“They also need to fundamentally rethink the failed and inhumane policies that led to the creation of a sprawling, unsanitary and dangerous refugee camp in an EU country, rather than just building a replica of the same thing.”