Domelevo ‘fires’ back on first day of leave 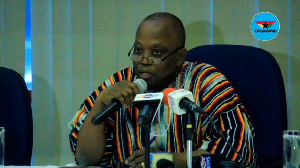 Auditor General, Daniel Yaw Domelevo has broken his silence following a directive by the President, Nana Addo Dankwa Akufo-Addo to proceed on leave.

A statement signed by Director of Communications at the Presidency, Eugene Arhin, directed that the leave takes effect today, Wednesday, July 1, 2020.

Mr. Domelevo, reacting to the subject in a statement dated 03, July, 2020 and addressed to the Presidency said tenets of the country’s law flaw the President’s decision.

Citing the labour law, he noted that under no circumstance, has it been indicated that an employer’s responsibilities includes forcing an employee to take their annual leave when they fail to do so. The law, he said, also guarantees the right to annual leave for the employee and not the employer’s benefit.

Moreso, he believes the decision was not taken in good faith because several appointees of the President, have not, since the year 2017, taken their annual leave to date.

“To the best of my knowledge therefore, where in any given year, a worker fails, omits, neglects or even refuses to take their annual leave, such leave is deemed forfeited with no corresponding obligation on the part of the employer to enforce the worker’s right to take their leave by assuming, deeming or declaring the forfeited leave, accumulated,” he said.

“The office must have been aware also that several appointees of the President, have not, since the year 2017 taken their annual leave to date. The direction therefore that I proceed on leave, oblivious of the other workers similarly circumstanced, gives the impression that the decision is not taken in good faith.”

He therefore is asking that the directive is revised in order to protect the sanctity of the labour law, the constitution and the independence of the Auditor-General “which is of utmost importance in so far as ensuring that the constitutional principles of probity, transparency and accountability are concerned