Humble yourself; NDC set the pace for you – NDC Youth Wing to Nitiwul 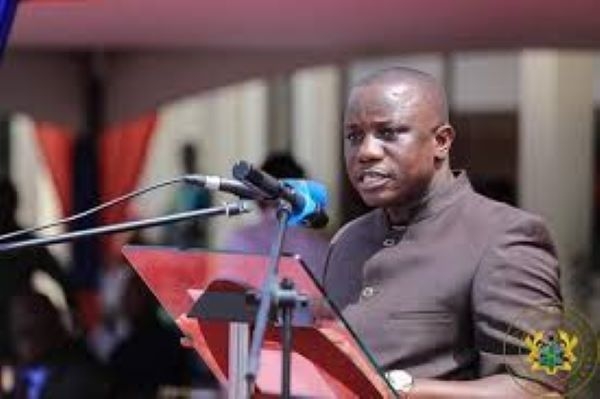 The Northern Regional Youth Wing of the National Democratic Congress (NDC) has said no political party in the country’s body politic has ever “recognised, appointed and continue to acknowledge” Konkombas like the NDC does.

According to the opposition party’s regional youth wing, in the history of kikpakpaang, it is the hard work of  “selfless NDC appointees and many more” that brought light to Konkombas and blazed the trail for others.

The group’s comment follows some remarks made about former President John Mahama by the Member of Parliament (MP) for Bimbilla and Minister of Defence, Mr Dominic Ntiwul, during the visit of Vice-President Mahamudu Bawumia to the Saboba and Zabzugu Constituencies on Friday, 4 September 2020, which they consider to be tribalistic.

The NDC Northern Regional Youth Wing in a statement signed by the Deputy Northern Regional Youth Organiser,  Mumuni Believer Likpalmor, on Monday, 7 September 2020 said: “The MP for Bimbilla once again engaged in his trademark penchant of tribalistic, spiteful and inciteful utterances against President Mahama and the NDC, by shamelessly remarking that H.E John Dramani Mahama would never bypass the Minority Leader, Hon. Haruna Iddrisu or Hon. Inusah Fuseini to appoint a Konkomba as a Cabinet Minister. He further added, quite regrettably that H.E John Dramani Mahama would never give even a ‘toilet Minister’ to a Konkomba man.”

The statement noted that: “As a Minister of State, and Defence Minister for that matter, we would have expected Dominic Nitiwul to rise above the loose talk that has unfortunately characterised his public discourse when it comes to such sensitive issues that bother on tribal and ethnic cleavages. He as a Minister of Defence should be the first to appreciate the multi-ethnic dynamics of the Northern Region, and how in times past, politicians have plunged our beloved Region into chaos and conflict by attempting to exploit ethnic politics and divisions. As a man who is already neck-deep in the throes of stocking divisions in (Kikpakpaang) Konkombaland, he should be the last person to spew such utterances that have the potential of inflaming passions and dividing us further.

The NDC Northern Regional Youth wing continued that: “Having mounted such a huge platform, the least we expected of him was to apologise to kikpakpaang for the lies he told us prior to the 2016 elections. If we may ask, what has become of his promise to provide Saboba with a befitting water supply system when voted into power? What has Dominic Nitiwul to say about his failure to add one kilometre of asphaltic road to the Saboba-Yendi road, Yendi-Wapuli road, Saboba-Chereponi and Wapuli-Chereponi roads? Can Dominic Nitiwul account to his people on the one village one dam fiasco in the over 100 communities (villages) under Saboba constituency? How about the one district, one factory scam and the over US$4million to the Bimbila Constituency under the fraudulent US$1million per constituency promise? These are the real issues that the people of Bimbila and by extension Konkombas expected to hear from Dominic Nitiwul.”

The NDC Regional Youth wing further questioned the value Mr Nitiwul has added to his constituency or the Saboba constituency since his assumption of office as MP.

“The evidence of the disappointing leadership of Dominic Nitiwul and his NPP could be seen in the sad reality of Saboba being cut off from Yendi due to his failure to honour his promise to construct the Kpalba Bridge,” the statement said.

It further reminded Mr Nitiwul and “others who reason like him that no one can deny nor controvert the fact that no political party has ever recognised, appointed and continue to acknowledge Konkombas in our body politic nor governance system than the National Democratic Congress.

“For instance, H.E Moses Magbengba has occupied varied and influential positions and every Konkomba can attest to his impact on kikpakpaang. In a similar vein, Hon. Nayan Bilijo serving as a Konkomba Minister under H.E Jerry John Rawlings, Hon Kojo Tawiah as Minister of State, Hon. Ken Wujangi as a Deputy Chief of Staff to Hon John Oti Bless adds to the long list of high-profile sons of Konkomba land who have occupied key positions in various NDC regimes over the years.”

The statement further emphasised that it is the hard work of the NDC appointees and “many more that brought light to Konkombas and blazed the trail for people like he Dominic Nitiwul to also gain his feet in politics.”

The NDC Regional Youth wing, therefore, urged Mr Ntitwul “to humble himself and be measured in his public utterances and eschew his braggadocios attitude as if the appointment of Konkombas into governance started just three years ago.”