I never had a problem with Bale – Zidane 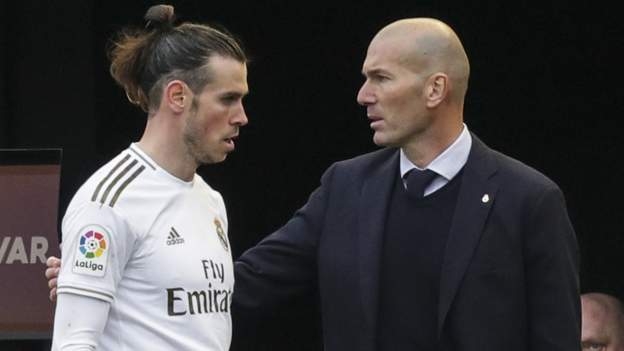 Real Madrid boss Zinedine Zidane has said he “never had a problem” with Gareth Bale, with the Wales forward set to rejoin Tottenham on loan.

A run of injuries, indifferent form and a reported falling-out with Zidane saw the Welshman become a marginal figure at the Spanish club.

Zidane said he did not speak to Bale before he left for London.

Bale’s signing has not been announced by Spurs yet and on Saturday Zidane said it was “not a done deal”.

“It’s not like that,” Zidane said on Saturday when it was put to him that Bale was leaving because of him. “It’s more complicated. With Bale it’s always about one side against the other. But I’ve never had a problem with Gareth.

“There will always be things that happen. Now he’s making a change, all we can do is wish him the best… These things happen in football, but I’ve always said he was a spectacular player.”

He remains the most expensive British player in history, as well as the top-scoring British player in La Liga – with 80 goals and 40 assists in 171 league appearances, averaging a goal or assist every 104 minutes.

Zidane added: “I know what he has done for this club. He always proved his quality and what he has achieved with the club cannot be argued with.”

It is also anticipated Real Madrid full-back Sergio Reguilon will complete his transfer to Tottenham in the coming days. The 23-year-old Spain international played last season on loan at Sevilla, winning the Europa League.

“We have two players for each position – no more,” Zidane said when asked about Reguilon’s transfer. “I have two left-backs and I can’t have more because then it’s a lot. It makes things more complicated we can just wish Reguilon all the best.”