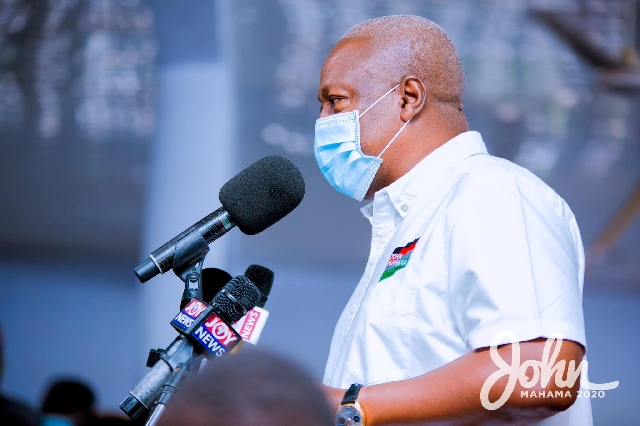 The next government of the National Democratic Congress (NDC) will prioritise measures aimed at further addressing the challenges faced by people living with disability.

The flagbearer of the NDC, Mr John Dramani Mahama, announced this on Wednesday, 2 September 2020 in Wa at the start of his four-day tour of the Upper West Region.Addressing the Wa Na and his people during a courtesy call at the chief’s palace, Mr Mahama said special attention will be given to the needs of people living with disability in his next government.He said the next NDC government will increase the allocation given to persons with disability under the District Assemblies Common Fund, adding that people living with disability will form boards of trustees to manage their own special account as well as make decisions about investing in programmes and projects that benefit them from their share of the District Assembly Common Fund.

My first stop in the Upper West Region was a courtesy call on the Wa Naa Fuseini Seidu Pelpuo IV, Overlord of the Wa Traditional Area.

I confirmed the pledge and commitment of the NDC not only to continue the numerous abandoned projects in the region, but also refurbish the Wa Municipal Hospital, provide seed money for the operations of the Upper West Regional Hospital, develop the Wa Airport, construct more health facilities across the region and in Wa, improve educational and other infrastructure.

Touching on the NDC’s plans for Wa, Mr Mahama said he is confident that the next population census will support the elevation of Wa to a metropolitan area, emphasisng that his next government will invest in schools, the Wa airport as well as provide the seed money for the Wa Regional Hospital to enable it to dispense quality healthcare.

He also touched on his plan to provide universal access to healthcare under his Free Primary Healthcare policy, saying cost should not be a barrier to healthcare.

Mr Mahama said almost all the development projects in the Upper West Region are the handiwork of the National Democratic Congress (NDC).

The former President said should he win the upcoming 7 December 2020 polls, his next government will increase development in the region.

“And, so”, the former President noted, “the Upper West Region can rest assured that anytime the NDC is in power, it will get access to its fair share of the national cake”.

“As the Wa Na said in his statement, we have been practising this democracy since 1992 and Ghanaians have become very discerning. They are not people that you can take for granted or take for a ride.

“And, so, his caution to politicians to be careful about indulging in false promises, is a very well-placed one”, Mr Mahama reiterated, adding: “Any political party that comes with the notion that it can promise heaven just to win political power will be very disappointed on the day of the elections because the results will reject those false promises”.

“NDC is a political party that takes truth and honesty seriously and we promise only what we can deliver.

“Unfortunately, many others have not done the same and, therefor, they have made our people lose faith in our democratic experiment”, Mr Mahama added.

“NDC will restore honesty and truth to government and build the confidence of our people in our democracy”.

Mr Mahama also accused the Akufo-Addo government of letting the Upper West Regional Hospital in Wa, which, according to him, was 95 per cent done during his administration, go waste for a long time until it was eventually operationalised.

He also promised that his next government will provide the necessary seed money to enable the hospital run effectively.

“As the Wa Na stated; in office, we had completed many projects in Wa. The Upper West Regional Hospital is a good example”, Mr Mahama said.

“That hospital should have been completed long ago but at the time I left office, it was essentially 95 per cent complete”, he recalled.

According to him, “It is a pity that it took so many years for the present government to eventually operationalise the hospital, but even then, as we all know, the hospital is struggling because it does not have seed money to be able to provide the quality treatment that the people of the Upper West [region] deserve”.

“And, so, I want to assure my father, the Wa Na and the elders and the people of Wa and the Upper West Region that one of the first things we will do when we come into office is to provide the seed money for that hospital to be able to run efficiently”, Mr Mahama promised.