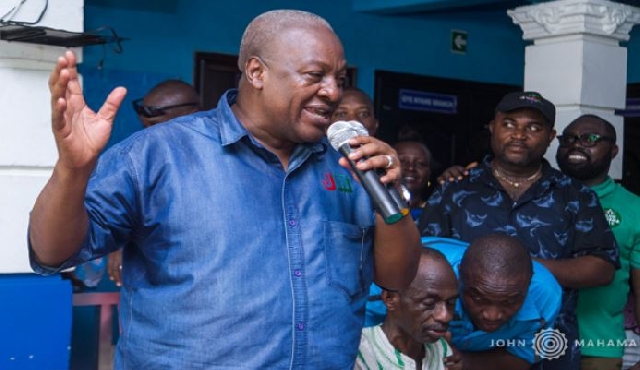 Former President John Mahama has said should he win the upcoming 7 December 2020 general election, he will not shield any corrupt appointees but will ensure that they are prosecuted rather than wait for a different administration to take up such matters.

“When NDC comes to power, we will investigate all outstanding corruption cases and we are not going to prosecute only our opponent, we will caution our ministers and everybody because if you indulge in corruption, we won’t wait for another government to prosecute, we will prosecute you ourselves”, he noted.

Mr Mahama also said Special Prosecutor Martin Amidu’s hands have been tied by the Akufo-Addo government and, so, he cannot go after any government official or member of the governing New Patriotic Party for alleged corruption.

“There are cases at the office of the Special Prosecutor but they have tied his hand”, Mr Mahama said, adding: “He can’t investigate them, they have stopped him”.

“As long as he [offender] is an NPP person, he [Martin Amidu] can’t do anything”, the flag bearer of the biggest opposition party said.

Also, Mr Mahama questioned the motive behind the Akufo-Addo government’s decision to pass the controversial agreement between Agyapa Mineral Royalty Limited and the government of Ghana, despite the Minority in Parliament raising serious questions over the deal.

He saluted the Minority in Parliament for drawing attention to the elevated risk in placing an ostensible second Sovereign Wealth Fund in a haven.

Mr Mahama pointed out that the deal is shrouded in secrecy, as the individuals and shareholders behind the company are still unknown to Ghanaians.

“Up till now, they have not disclosed the shareholders of the company; who are behind the company and any time there is corruption, the President clears them”, he added.

Mr Mahama also questioned the prudence of the government’s decision to mortgage Ghana’s mineral royalties for such a long period when it has only four months left to be in office, despite the genuine concerns raised by the Minority.

“And for a responsible government, why should you go and invest in an offshore tax haven where we know that is where fraudulent transaction takes place?” he asked.