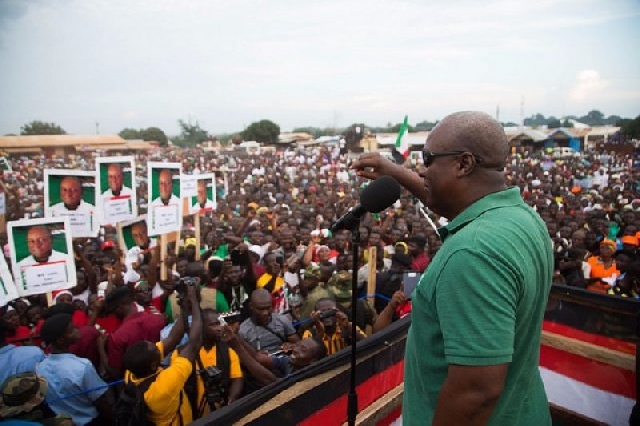 The presidential candidate of the main opposition National Democratic Congress (NDC), John Dramani Mahama has promised to revive collapsed financial institutions in the country in order to create jobs if the NDC wins the upcoming 7 December polls.

Mr Mahama has, therefore, urged Ghanaians to vote for the NDC in the upcoming polls to ensure the delivery of his promises.

The former President was speaking at a rally in the Builsa North Constituency in the Upper East Region on Tuesday, 24 November 2020.

He bemoaned the number of collapsed indigenous financial institutions under the Akufo-Addo-led government.

“Twenty-seven savings and loans companies— home. Three hundred and fifty-six microfinance companies— home. That is why I say when John Mahama becomes President again, we are going to revive and re-create the investments of Ghanaians in the finance sector so that those sitting at home can get jobs to do again.”

He further condemned the government for rendering Ghanaians jobless and indicated that it can only boast of the Nation Builders Corps as the only jobs created under Akufo-Addo.

Mr Mahama added: “All those who were working with construction companies, they are home because when the new government came, they said: ‘everybody, stop work.’ And they stopped work. Up to now, there are contractors who did work in 2016 and the government has refused to pay them. And so, their equipment are parked; their workers are all at home. The only place you can point and say they have created any jobs is NABCO. But NABCO— GHS700 a month to those young people. Those young people don’t want artificial jobs; they want real jobs. And that’s why NDC has said that when we win, those NABCO graduates, we’ll graduate them so that they can also get permanent jobs to do.”