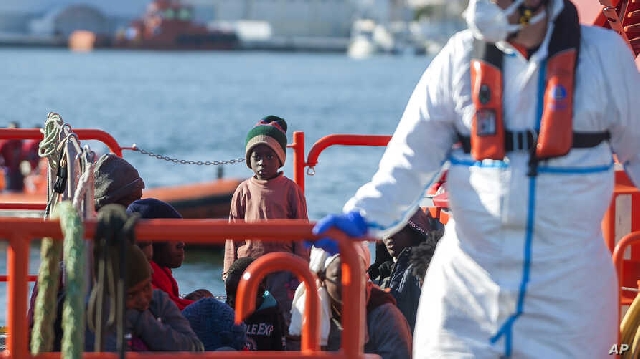 The shaky video taken with a mobile phone shows sunbathers on a beach in Gran Canaria gazing out to sea at the boat heads to land.

A coast guard vessel, Salvamar Menkalinan, races to reach the 49 migrants crammed into one fragile boat. Meanwhile, tourists amuse themselves on jet-skis.

Two very different worlds collide as African migrants get their first sight of the Europe they have risked their lives to reach.

Once, these precarious dinghies were a rare sight in the Canary Islands. Now they are an almost daily occurrence.

Traffickers have switched routes, moving their human cargo along the dangerous route between western Africa to Spain’s archipelago in the Atlantic instead of across the Mediterranean to the southern coast of the country’s mainland.

So far this year, there has been a 520% rise in migrant arrivals to the Canary Islands compared with the same period in 2019, with 3,448 migrants reaching the seven islands up until August 15, according to the Spanish government figures.

In comparison, there was a 26.6% decrease in the number of migrants crossing the Mediterranean to Spain this year compared with the same period in 2019, year, with 10,716 arriving in Europe compared to 14,597 last year.

The more perilous Atlantic route has claimed its toll.

A total of 239 migrants have died trying to reach the Canaries between January 1 and August 19, compared to 210 during all of last year, and 43 in 2018, according to the International Organization for Migration, IOM.

“It is the grim toll which the sea takes. This is a very dangerous route,” Maria Greco, of the migrant rights group Entre Mares, told VOA in an interview.

“The longest route is between Africa and the island of Fuerteventura which can involve a journey up to five days at sea.”