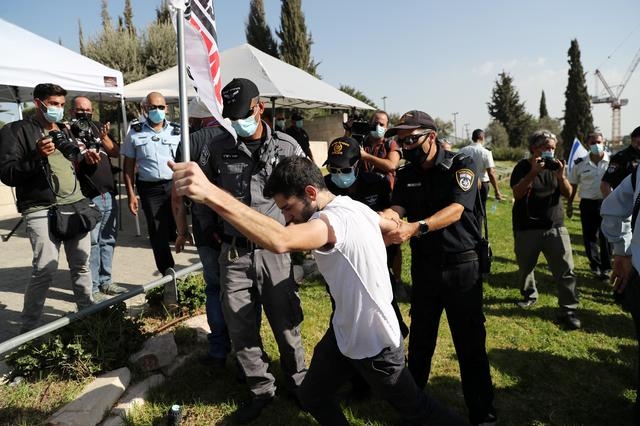 Hundreds of Israelis demonstrated outside parliament on Tuesday against a government-backed bill likely to stifle protests near Prime Minister Benjamin Netanyahu’s home during the current coronavirus lockdown.

The proposed law, which the government said was aimed at curbing COVID-19 infections, bans Israelis from holding street demonstrations more than one kilometre (0.6 mile) from their homes.

The measure, which critics said was really intended to block anti-Netanyahu protests, was approved by a parliamentary committee on Tuesday. It was expected to be ratified by the full Knesset (legislature) later in the day.

Many of the thousands of protesters who have gathered weekly outside Netanyahu’s official residence in Jerusalem to demand his resignation over his handling of the health crisis, and alleged corruption, have travelled there from other cities.

Outside the Knesset on Tuesday, demonstrators waved Israeli flags, banged on drums and chanted in favour of free speech ahead of the vote.

“They are denying us the right to protest because of political reasons not for health reasons and it’s mind-blowing, the frustration is beyond words, is beyond words. And a great worry,” said one of the demonstrators, Efrat Ben Barak, 40.

Police said three protesters who tried to block city workers from taking down banners that were hung illegally were arrested.

Israel went back into lockdown for at least three weeks on Sept. 18 after new COVID-19 cases climbed to around 7,000 a day in a population of nine million, overtaxing some hospitals.

Bickering within Netanyahu’s coalition government prevented street protests from being included in activities restricted by the one-kilometre limit, such as family visits, before the Yom Kippur Jewish fasting day on Monday.

Tuesday’s vote was necessary to add the demonstrations to that category and limit all protest gatherings to 20 people.

Netanyahu says Israel has handled the health crisis relatively well and that he has no political motive in seeking to prevent street protests. He denies any wrongdoing in three corruption cases against him.

Israel has reported 234,060 infections and 1,516 deaths from COVID-19, the respiratory disease caused by the coronavirus.