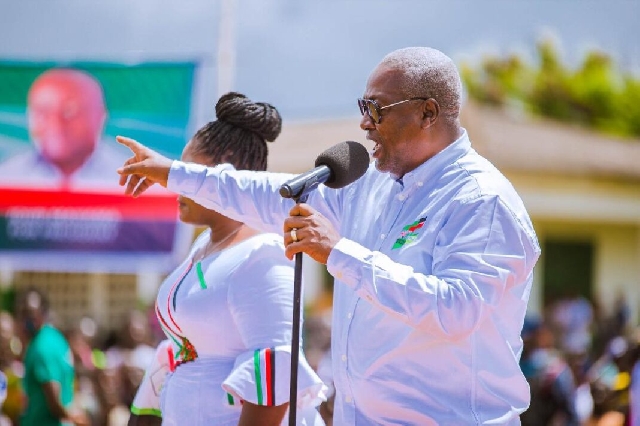 The International Monetary Fund (IMF) has said recent claims that Ghana has gone HIPC is “flawed” and “deceptive”.

According to the statement, the list of countries that have qualified for the HIPC Initiative since its inception in 1996 is regularly updated and must not be interpreted as a new HIPC list.

“Any such interpretation is flawed and may be deceptive,” Dr Touna-Mama added

He noted that the recent update of Ghana’s debt-to-GDP ratio “has not triggered any decision or action by the IMF.”

The IMF’s clarification comes a day after Ghana’s former President, Mr John Mahama, who is also the presidential candidate of the main opposition National Democratic Congress (NDC), told different groups of professionals with whom he interacted on Monday, 266 October 2020, that: “The IMF, in its sub-Saharan Africa Regional Economic Outlook, forecasts the current rate at a frightening 76.7% of debt-to-GDP ratio”.

“Officially”, Mr Mahama announced, “Ghana is back to HIPC status under Nana Akufo-Addo and Ken Ofori-Atta”.

Subsequently, the government of Ghana, through the Minister of Information, Mr Kojo Oppong Nkrumah, told journalists on Tuesday, 27 October 2020 at the Nation Building Updates in Accra, that: “There are suggestions being spread, particularly on social media, that Ghana has been declared HIPC again and I am sure you would have noticed that a lot of persons are sharing materials on social media that the IMF or World Bank has declared Ghana HIPC or listed Ghana as one of the HIPC countries and it is a suggestion that the economy is not as good a shape that we claim it is.

“For the avoidance of doubt and, because we have also mentioned that we are aware that some persons, in the weeks ahead of the elections, will seek to spread a lot of false information and fake news, it is important to quickly respond to it right here and right now.

“Categorically, we say to you it is not true that Ghana has been declared HIPC or has been added to the list of HIPC countries”.

The joint IMF–World Bank comprehensive approach to debt reduction is designed to ensure that no poor country faces a debt burden it cannot manage. To date, debt reduction packages under the HIPC Initiative have been approved for 36 countries, 30 of them in Africa, providing $76 billion in debt-service relief over time. Three additional countries are eligible for HIPC Initiative assistance.

The HIPC Initiative was launched in 1996 by the IMF and World Bank, with the aim of ensuring that no poor country faces a debt burden it cannot manage. Since then, the international financial community, including multilateral organizations and governments, have worked together to lower to sustainable levels the external debt burdens of the most heavily indebted poor countries.

In 1999, a comprehensive review of the Initiative allowed the Fund to provide faster, deeper, and broader debt relief and strengthened the links between debt relief, poverty reduction, and social policies.

In 2005, to help accelerate progress toward the United Nations Millennium Development Goals (MDGs), the HIPC Initiative was supplemented by the Multilateral Debt Relief Initiative (MDRI) . The MDRI allows for 100 percent relief on eligible debts by three multilateral institutions—the IMF, the World Bank, and the African Development Fund (AfDF)—for countries completing the HIPC Initiative process. In 2007, the Inter-American Development Bank (IaDB) also decided to provide additional (“beyond HIPC”) debt relief to the five HIPCs in the Western Hemisphere.

Countries must meet certain criteria, commit to poverty reduction through policy changes, and demonstrate a good track record over time. The Fund and Bank provide interim debt relief in the initial stage and, when a country meets its commitments, full debt relief is provided.

First step: decision point. To be considered for HIPC Initiative assistance, a country must fulfill the following four conditions:

1) Be eligible to borrow from the World Bank’s International Development Agency, which provides interest-free loans and grants to the world’s poorest countries, and from the IMF’s Poverty Reduction and Growth Trust, which provides loans to low-income countries at subsidized rates;

3) Have established a track record of reform and sound policies through IMF- and World Bank–supported programs ; and

4) Have developed a Poverty Reduction Strategy Paper (PRSP) through a broad-based participatory process in the country.

Once a country has met or made sufficient progress in meeting these four criteria, the Executive Boards of the IMF and World Bank formally decide on its eligibility for debt relief, and the international community commits to reducing debt to a level that is considered sustainable. This first stage under the HIPC Initiative is referred to as the decision point. Once a country reaches its decision point, it may immediately begin receiving interim relief on its debt service falling due.

Second step: completion point. In order to receive full and irrevocable reduction in debt available under the HIPC Initiative, a country must

1) Establish a further track record of good performance under programs supported by loans from the IMF and the World Bank;

2) Implement satisfactorily key reforms agreed at the decision point; and

3) Adopt and implement its PRSP for at least one year.

Once a country has met these criteria, it can reach its completion point, which allows it to receive the full debt relief committed at the decision point.

Countries receiving debt relief. Of the 39 countries eligible or potentially eligible for HIPC Initiative assistance, 36 are receiving full debt relief from the IMF and other creditors after reaching their completion points. Three countries, which have been identified as potentially eligible for HIPC Initiative assistance, have not yet reached their decision points, but Somalia is making progress towards achieving this milestone in the coming months.

Debt relief is one part of a much larger effort, which also includes aid flows, to address the development needs of low-income countries and make sure that debt sustainability is maintained over time. For debt reduction to have a tangible impact on poverty, the additional money needs to be spent on programs that benefit the poor.

Boosting social spending. Before the HIPC Initiative, eligible countries were, on average, spending slightly more on debt service than on health and education combined. Now, they have increased markedly their expenditures on health, education, and other social services. On average, such spending is about five times the amount of debt-service payments.

Reducing debt service. For the 36 countries receiving debt relief, debt service paid has declined by about 1.5 percentage points of GDP between 2001 and 2015. More recently, with the increase in public debt in LICs, debt service burdens have started to rise, although they still remain 1 percentage point below the pre-HIPC levels in 2017.

Improving public debt management. Debt relief has markedly improved the debt position of post–completion point countries, bringing their debt indicators down below those of other HIPCs or non-HIPCs. However, many remain vulnerable to shocks, particularly those affecting exports, as seen during the global economic crisis. To reverse the recent increase in LIC public debt burdens and reduce their debt vulnerabilities, countries need to pursue cautious borrowing policies and strengthen their public debt management.

About 44 percent of the funding comes from the IMF and other multilateral institutions, and the remaining amount comes from bilateral creditors.

The total cost of providing assistance to the 39 countries that have been found eligible or potentially eligible for debt relief under the enhanced HIPC Initiative is estimated to be about $76 billion in end-2017 net present value terms.

The IMF’s share of the cost is financed by bilateral contributions and resources from the Fund itself, mainly investment income on the proceeds from off-market gold sales in 1999. These funds were deposited to the IMF’s PRG-HIPC Trust.

Resources available in the trust are currently insufficient to finance the cost of debt relief to the remaining two countries with arrears to the IMF which have met the initial conditions for debt relief and reached the decision point. The original financing plan did not include the cost of debt relief to Sudan and Somalia. In December 2019, the IMF Executive Board approved a financing plan that will help mobilize the resources needed for the IMF to cover its share of debt relief to Somalia. Should Sudan, make progress towards the decision point, there would be an urgent need to mobilize resources.  Eritrea is also eligible tor HIPC debt relief but does not have financial obligations to the IMF.

The remaining pre-decision point countries face common challenges, including preserving peace and stability, and improving governance and the delivery of basic services. Addressing these challenges will require continued efforts from these countries to strengthen policies and institutions, and support from the international community.

Another challenge is to ensure that eligible countries get full debt relief from all their creditors. Although the largest creditors (the World Bank, the African Development Bank, the IMF, the Inter-American Development Bank, and all Paris Club creditors) have provided their full share of debt relief under the HIPC Initiative, and even beyond, others are lagging behind. Smaller plurilateral institutions, non-Paris Club official bilateral creditors, and commercial creditors, which together account for about 26 percent of total HIPC Initiative costs, have so far only delivered a small share of their expected relief.

Non–Paris Club bilateral creditors as a whole have delivered around 51 percent of their share of HIPC Initiative debt relief, but about one third of these creditors have not delivered any relief at all. While there has been some increase in the delivery over the past few years, the rate of delivery remains disappointingly low.

The delivery of debt relief by commercial creditors has increased markedly in recent years through a few large operations supported by IDA’s Debt Reduction Facility buyback operations. Some commercial creditors have initiated litigations against HIPCs, raising significant legal challenges to burden sharing among all creditors, including the multilateral institutions. The number of litigation cases against HIPCs has been declining in recent years and flattened over the past few years.

Given the voluntary nature of creditor participation in the HIPC Initiative, the IMF and the World Bank will continue to use moral suasion to encourage creditors to participate in the Initiative and to deliver fully their share of HIPC Initiative debt relief.

The IMF and World Bank will also continue to improve their ability to monitor the delivery of HIPC Initiative debt relief. The IMF will continue to address issues related to participation in the HIPC Initiative during its regular consultations and other missions to creditor countries.

List of Countries That Have Qualified for, are Eligible or Potentially Eligible, and May Wish to Receive HIPC Initiative Assistance (as of February 2020)