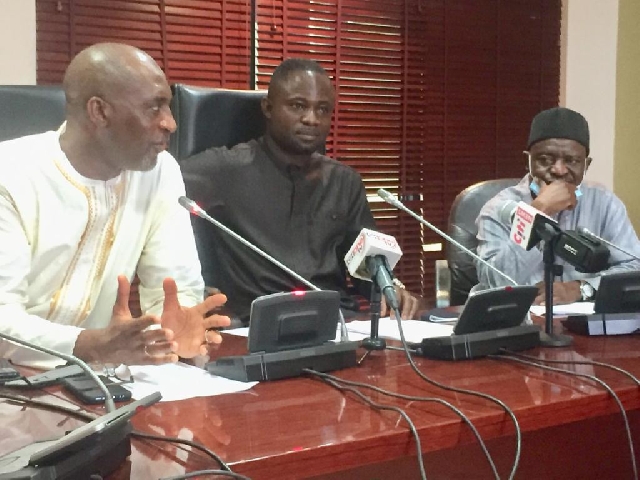 Leading members of the Minority Caucus in Parliament

The Minority Caucus in Parliament has called for the immediate suspension of the ongoing COVID-19 testing at the Kotoka International Airport (KIA).

The Caucus has also questioned the viability of the contract awarded to a private company, Frontiers Health Care Limited, and called for its termination.

Speaking at a news conference in Accra on Thursday, 1 October 2020, the Minority spokesman on health, who is also the member of Parliament (MP) for Juaboso, Mr Kwabena Mintah Akandoh, urged the government to engage the services of the Noguchi Memorial Institute for Medical Research to carry out the COVID-19 tests instead of contracting a private institution whose charges are higher.

“We, in the Minority, have suggested to the government to utilise the services of Noguchi, who have spearheaded the testing of COVID-19 cases in our country since this pandemic took its course, instead of contracting a private institution whose charges are higher,” he noted.

However, he said that the government awarded the contract to Frontiers Health Care Limited because the Akufo-Addo-led government “is more interested in creating avenues for its families and friends to take advantage of the situation to exploit Ghanaians rather than considering the plight of the people.”

The Minority raised questions about the reason the government has sidelined the Noguchi Memorial Institute for Medical Research from the tests being conducted at KIA.

“Ladies and gentlemen, our checks revealed that not every returnee has that kind of amount to pay for the antigen test and if, indeed, the COVIDT-19 antigen detection has been described as a novelty and the first of its kind worldwide, then why do travellers need to pay that much for it?” Mr Akandoh asked.

The Minority has, therefore, demanded a “full-scale investigation into this unconscionable, corrupt and cruel self-enriching scheme so that all those behind this stinking plot can be brought to justice.”

Mr Akandoh further gave an assurance that if the NDC wins power in the 2020 polls, it will not only “abrogate the contract but also go after all those who have conspired to perpetuate this grand scheme of wicked extortion of the good people of Ghana.”

All passengers coming to Ghana through the airport are required to pay $150 for a 30-minute PCR COVID-19 test before entry into the country.

Effective 1 September 2020, the Kotoka International Airport was opened to human traffic, after being closed in March 2020 because of the pandemic.