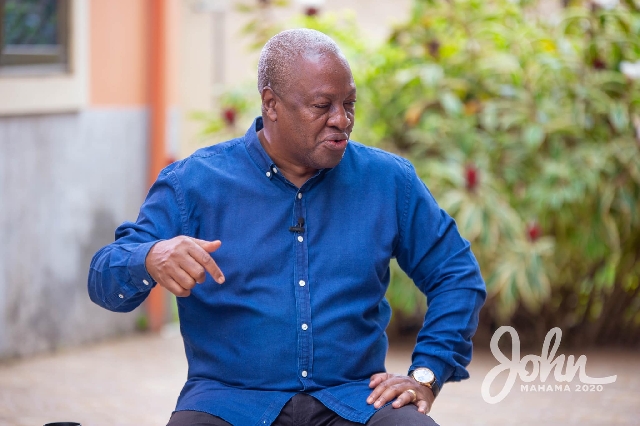 Former President John Mahama’s campaign team has described as “mischievous”, reports that he has promised to build more mortuaries for Muslims in the country should he win 7 December 2020 polls.

A rejoinder from the campaign team signed by spokesperson James Agyenim-Boateng, said: “For the avoidance of doubt, the said publication is mischievous, deliberately distorted and calculated to whip up anti-Muslim sentiments against the NDC and the JOHN MAHAMA 2020 Campaign.”

The attention of the JOHN MAHAMA 2020 Campaign has been drawn to a false, misleading and inaccurate claims in publications carried by sections of the online media titled “2020 elections: Mahama promises more mortuaries for Zongo communities”.

For the records, the presidential candidate of the National Democratic Congress (NDC), Mr John Dramani Mahama, during a live interview with TV XYZ and WoezorTV, took the opportunity to highlight his party’s proposed interventions in the People’s Manifesto for Zongos and Deprived Urban Settlements.

Reading from page 82 of the NDC’s 2020 manifesto, Mr Mahama mentioned a number of interventions aimed at addressing “the historical inequalities between Zongo, Deprived Urban Settlements and other communities, including the negative effects of the Alien Compliance Order implemented by the Danquah-Busia tradition on Zongos”.

Acknowledging the concerns of Muslims about how traditional mortuaries handle their beloved ones when they pass on, Mr Mahama quoted the specific section of the People’s Manifesto which addresses the issue and aims at lessening the burden of bereaved Muslims by treating their deceased loved ones in line with accepted practices of the Islamic faith.

For the avoidance of doubt, the said publication is mischievous, deliberately distorted and calculated to whip up anti-Muslim sentiments against the NDC and the JOHN MAHAMA 2020 Campaign.

Muslims, in particular, and the general public are therefore entreated to disregard that offensive publication by treating it with the contempt it deserves.