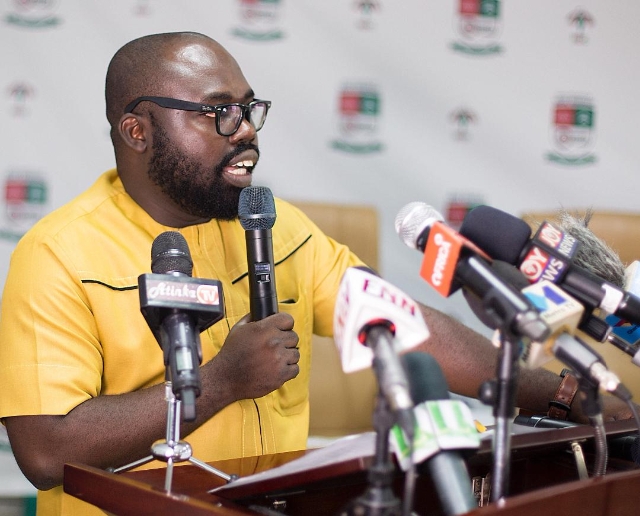 The National Democratic Congress (NDC) has described as bizarre, the decision by the Electoral Commission of Ghana to start registering final-year students of all the senior high schools on campus.

The election management body took the decision on Thursday, 9 July 2020 after an Inter-Party Advisory Committee meeting.

However, the Deputy General Secretary of the biggest opposition party, Mr Peter Boamah Otokunor, told Class News in an interview after the meeting that: “It is still a mystery what the EC wants to achieve in this country and what they want to achieve with this election”, adding: “It is very bizarre”.

“You have the case whereby you invite us to tell us that of all the gazetted registration centres where we’ll do the registration, where the registration is underway, you’re going to send the machines to every senior secondary school so that you can register the students as well in the schools”.

“Now, the law says that every station that you’ll send a machine to register must be a gazetted registration centre and it should be a polling station”.

“The law does not stop the Electoral Commission from creating additional centres, but you must follow the law and gazette those centres before you send the machines there”, he insisted.

But Mr Otokunor said: “They are telling us that, from tomorrow, they are sending some of the machines to every secondary school to go and register them when they are not gazetted centres; when, by law, they don’t qualify to register anybody there”.

That, he noted, sets a bad precedence.

“So, by extension, what they are saying is that they can even move the machine to somebody’s room in the night beyond the gazetted time that ends at 6 pm and register people, and that is wrong, that is completely wrong”, he asserted.

“We have raised the issues, we raised it very strongly there, the meeting was inconclusive and it was not only the NDC, other political parties also think the same – that the approach is very wrong, they are not following the law and it doesn’t make sense”.

However, the General Secretary of the governing New Patriotic Party (NPP), Mr John Boadu, said the National Democratic Congress (NDC) is resisting the move because it sees the beneficiaries of President Nana Akufo-Addo’s Free SHS policy as a threat to its electoral fortunes in the forthcoming 7 December polls.

Mr Boadu said: “They [NDC], I know, will obviously kick against students registering in this country. I used to be National Youth Organiser of the NPP. In all campuses throughout the country, including Ho Polytechnic, we won the elections there, so, if you are having a situation that we want to register our secondary schools, where not to even talk about beneficiaries of SHS, which the NDC knows is their waterloo, even before then, it is; so, kicking against it is something that if they had not done that, I’d be surprised”.

He said: “These are final-year students who number over 1.2 million. We, as a government, have decided that in order to protect these students, even parents should not visit them, we are not allowing other people from outside to visit them”.

“If we’re not able to provide them with the opportunity to be able to register, what it means is that: they may either have to go outside, which will increase the risk of getting infected with the pandemic, so, I think that it’s an arrangement that is looking at the dynamics on the ground”, he added.

“My little challenge that I was going to have is whether or not they were going to designate a new centre altogether because that will fly in the face of the law, that will not be legal but what they have agreed is [that], just as they have mobile registration kits that, at any given point in time, if people are cramming up at a polling station, they move in to augment and help the polling station in registering people, that they use the registration numbers of the centres they go, in this case, they are also going to use registration numbers of polling stations that are nearby the school in order not to create a new centre altogether that will be against the C.I.”, he explained.

“If they are to gazette it now, it has to take about 21 days … [and] by the time the 21 days elapse, the registration exercise is over”, he argued.