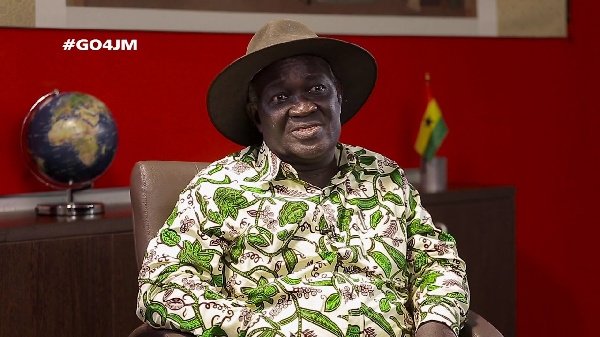 Having now read every word of Prof. Kwamena Ahwoi’s memoir, I find it hard not to believe that this isn’t a takedown of the NDC by the very people who fed and grew fat on the party.

Ordinarily, this book is to be welcomed, especially when its author has been so closely involved with the politics of Jerry Rawlings. However, readers with a grain of sense and deductive reasoning, will feel, on closing the last page of the book, a little disturbed by its main thesis, which appears to be that of a ridicule to discredit agenda against Rawlings and destruction of his political legacy.

Indeed, the author’s own account of events leading to the 2006 NDC Congress on pages 252 – 254 confirmed this position.

On page 135, there is a casual mention of President Mills’ near resignation in 2010 over what the author claimed as Rawlings’ insults on him.

A startling aspect of the author’s rage that caught my attention on page 201 is how he cleverly peddled untruth that Dan Abodakpi served as Ghana’s ambassador to Malaysia under Mahama. Yes, Dan Abodakpi actually served under Mills and not Mahama, and this alone is enough to throw this literature into the trash can.

How can an academic of the author’s repute put together such a shoddy, sleazy and slobbering work and then expect us to take him seriously? Looks like the author lacks true critical thinking to come to a righteous decision.

There are other superficial claims on pages 152 to 154 that are not worth mentioning, but then again, this literature is nothing but a comprehensive history of the way tabloid attacks have both replicated and morphed over the years.

From the tale of Rawlings not keen on letting go of power – Bede Ziedeng’s testicle incident – Rawlings asking Ato Ahwoi to run against Mills in 2006 congress – Obed Asamoah for Veep agenda in the year 2000 and Mills’ near resignation as president in 2010, it all comes down to an overly unrealistic portrayal of past ideals and unfortunately hypocritical.

Loyalists may reject Kwamena Ahwoi as a disgruntled, disinherited heir seeking vengeance on his former boss. Those who eschew introspection might also dismiss this book as a mere “psycho-babble.” But I sincerely think Prof Kwamena Ahwoi overstates his role in Rawlings’ regime.

“Working with Rawlings” – Unlike the authors of some of the cruder attacks on Rawlings, Kwamena Ahwoi was one-time strong ally and although he makes no secret of where his political sympathies lie, this is extensively footnoted work. It aims not so much to tell the true story but to demonise Rawlings as to puncture the belief that he is in some way an extraordinary, mould-breaking revolutionalist and politician.

The Rawlings that emerges from the pages of this book is a bad person, who hated Mills to the core. The author makes a fairly compelling case that this is so.

Ironically, the author, who is attempting to throw Rawlings under the bus, happens to be a man who he helped get started in politics in the first place.

I really don’t find this book to be both engaging and enlightening. Rather, it epitomises everything about divisive politics. But in a way, the book provides excellent overview of how the so-called power brokers led by the Ahwoi brothers have continued to eat the NDC from inside out.

Take for instance, the admission by the author that they strategically unleashed younger NDC activists on Rawlings to shut him up.

“… and we agreed to take steps to ensure that Rawlings stopped his public humiliation of President Mills or reduce it significantly. The strategy we adopted to achieve this objective was simple enough. From our knowledge of President Rawlings, we knew that he could not stand being talked back to by people he considered his subordinates. This must have been due to his military background, because in the military, the subordinate never talks back to his superior officer. So, what we decided was that anytime President Rawlings attacked or insulted President Mills publicly, one of the younger members of the party would take him on publicly, not with insult but with logic.

It worked and the strategy proved effective. Rawlings toned down on his public criticism of President Mills. Instead, he turned his anger on the young ‘boys and girls’ who were talking back at him whenever he criticised President Mills publicly. He described them at a public rally later as ‘Babies with Sharp Teeth’. The name stuck, but the presidency of Professor Mills was saved”.

These guys are just tricky in their ways. They stir up dissatisfaction among the NDC rank and file regarding their situation, then prod and manipulate the people toward their desired course of action while making them think they came up with the ideas themselves.

I cannot end my critique of this book without touching on the fact that, Mr Dan Abodakpi, who is quoted on page 201 as having blamed Rawlings’ hostile attitude to Mills on the over-ambition of Nana Konadu Agyeman-Rawlings, has debunked the rubbish attributed to him.

“I have also read some attribution to me which is factually incorrect. I have always maintained that the decision of Former First Lady to contest Prof Mills was not well thought through at the time and therefore not prudent. But never, would I describe her in the rather pejorative manner you did in the book. Finally, I will never be an accessory to any grand agenda to delink Prez. Rawlings from the Party that he Founded. Many parts of the book, at least the excerpts that I have so far read are not really factual because I too have very intimate knowledge of some of the key actions that shaped our Revolutionary/Democratic evolution. Prez Rawlings may not be a ‘plaster Saint but certainly he does not deserve this from people like us.”

That being said, Kwamena Ahwoi’s narrative signifies a return to the petty divisive politics he decried in the book. He has been a champion of Rawlings’ politics as long as it serves his interest, and he profits from its spoils. It proves that the man is just a facade ridden politician and tyrannical egotist who held himself to be academic in stature – but he was mistaken – for he has proven to be a liar-in-chief in regards to true NDC values and thinking.

A person whose values were unclear and inconsistent throughout his long and torrid political life, the summaries can be accepted on his evaluations, and more importantly, on personal history which long precedes his workings with Rawlings.
He spent a lifetime grooming young activists to loathe and berate the same man he claims to have been working with.

The book itself I would have rated closer to 4 out of 10, being quite well-written although it does paint an overly rosy picture of a past that never existed.

I grabbed my copy of this book to thank the author for demonstrating that he had the conscience of a revolutionist. I am returning it because he doesn’t.