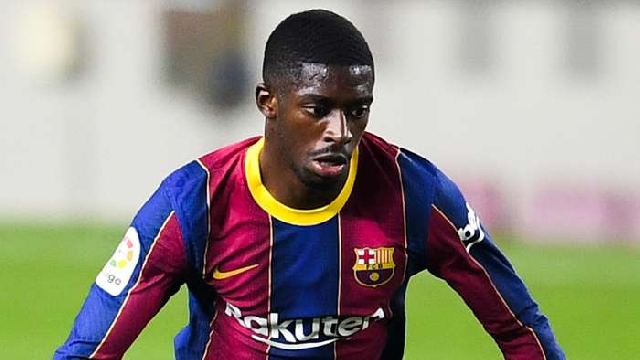 The Dutch head coach has insisted that while he still “counts on” the French winger, it’s up the player if he decides he wants to leave

Barcelona boss Ronald Koeman has issued a response to the rumours linking Ousmane Dembele with a move to Manchester United.   United are reportedly in talks to sign Dembele on a season-long loan and hope to finalise a deal before the transfer window shuts on October 5.

Koeman addressed the speculation over the Frenchman’s future at a press conference on Wednesday, telling reporters: “The first thing to say is that it is up to the club and to the player.   “But he is with us and as we’ve seen in recent weeks I am counting on him….he has to wait to play but he is training well, getting fitter.   “I want to say that I am counting on him.”

Borussia Dortmund star Jadon Sancho is believed to still be United’s first-choice target as they hunt for a new right winger, but Dembele has apparently been identified as an alternative option amid an impasse in negotiations with the German club.

The Barca star became the club’s record signing when he moved to Camp Nou from Dortmund for €105 million (£96m/$123m) in the summer of 2017, but has so far failed to live up to his price tag.

The 23-year-old has been restricted to just 75 appearances in all competitions for the Blaugrana amid a string of injury issues, and has also faced disciplinary action relating to his attendance at training sessions, leading to questions over his commitment to the club’s cause.

Dembele has, however, helped Barca win two La Liga titles and the Copa del Rey while recording 19 goals and 16 assists, and returned to competitive action during a 4-0 victory over Villarreal on Sunday.

Koeman will be hoping his side can build on a bright start to the new Liga season with the addition of one or two extra players before the transfer deadline, with Ajax full-back Sergino Dest set to be first through the doors at Camp Nou.

The Dutch head coach confirmed the 19-year-old’s impending arrival before talking up the qualities he will bring to Barca’s squad and the importance of strong competition for places in defence.

“Dest’s having a medical, he still has to sign a contract. He’s a young full-back, it’s about having young players for the club’s future,” he said. “He has to compete with the other full-backs we have.

“Despite his age, he’s played a lot of games and he’s played in Champions League. He’s a very useful player.”

Koeman went on to reveal that he would like to sign one more forward in the coming days, but insisted that out-of-favour striker Martin Braithwaite will be a part of his plans going forward, adding: “I would like to have two players per position.

“Leo [Messi] and [Antoine] Griezmann can play as ‘nine’, but they are not the same type of centre-forward as Martin. We are looking for one more.”