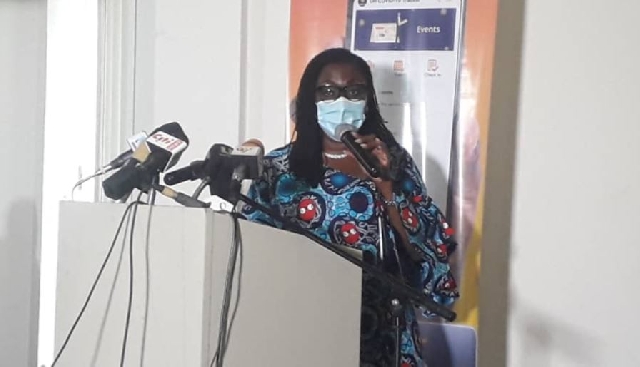 Ghana’s Communication Minister Ursula Owusu-Ekuful, has reacted to the MTN vs National Communication Authority (NCA) ruling and urged the regulator (NCA) to immediately engage MTN to fix imbalances within the telecom sector.

An Accra High Court on Monday, dismissed an application by MTN that sought to quash the NCA’s move to classify the telecommunication company as a significant market player in the telcos industry.

According to the court, MTN failed to establish enough grounds for praying for restraining orders against the NCA.

The court, thus, said it was of the firm belief that it would be improper to grant MTN the injunction against the NCA and proceeded to dismiss it accordingly.

Reacting to the verdict on the sidelines of the launch of the Gh COVID-19 App Upgrade on Wednesday, 2 September 2020 in Accra, Mrs Owusu-Ekuful said although the NCA could be blamed for not taking steps to correct the current imbalances in the telecom sector, it is unhealthy for Ghana to have a single-dominant telecom operator (MTN) with about 70% of the revenue market share.

The Ablekuma West MP said: “It is not healthy and that is why the telecoms policy has made provision [that] any operator that has more than 40% of the market ought to be declared or is likely to be declared as dominant and corrective measures will kick in”.

“We want the regulator to sit with all players and develop sustainable mechanisms to address the current imbalance and ensure that it doesn’t happen again. Maybe, we will also fault the regulator for not acting early enough because the signs have been there as far back as 2015 and they have been aware of that because it was in 2015 that the study was commissioned and the results came out either late 2016 or early 2017 and the regulator has been aware of that. So, it is incumbent they build on that, updated that and that led to the declaration earlier in June this year, so, I’m hopeful that they will act timeously to put in place the measures that correct the imbalance.

Mrs Owusu-Ekuful also denied rumours that she has personal qualms with MTN.

“There is no impasse…this is being done in accordance with the laws and regulations of this country and the mistake people are making is to equate what happens in other parts of the world to what is happening here.

“Yes, it is the telecoms industry but we’ve passed specific legislation to deal with specific instances and, so, that is exactly what the regulator is trying to do.

“It’s nothing personal, so, when people say that I have something against MTN, I ask myself: ‘Why will I have anything against MTN?’ We sit and we talk and have discussions like I do with all other operators and we seek greater collaboration with all of them.”