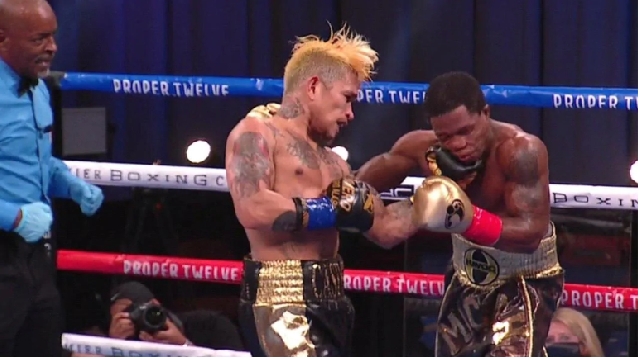 A noted road warrior from the Philippines who has fought in eight different countries, Casimero (30-4, 21 KOs) made his U.S. television debut on Saturday and kicked off a pay-per-view doubleheader from the Mohegan Sun Arena with a spectacular defense of his WBO title.

Casimero, 31, dropped unbeaten Duke Micah (24-1, 19 KOs) in the second round and went on to finish him one round later to further announce himself as one of the most exciting and dangerous fighters at 118 pounds.

Micah, a native of Ghana, was aggressive and game early throughout an even opening round. But a big left hook from the wild Casimero sent him to the canvas in Round 2.

Casimero followed up on the assault, which featured a targeted focus to the body, with a pair of uppercuts in Round 3 that pinned Micah in the corner and forced referee Steve Willis to jump in and save him.

“I worked hard and got the win tonight. In the first round I saw the body shot hurt him and thought I could get him out right away, but he’s a good boxer who was undefeated for a reason,” Casimero said.

Landing an impressive 52% of his power shots, according to CompuBox, Casimero outlanded Micah 59 to 26 overall.

Micah was also lucky to even come out for Round 3 after the ringside doctor gave him a long look in the corner before saying, “You need to show me something.”

“The second round the uppercut hurt him, but Duke Micah works hard, he’s strong and has a good chin. I knew I was facing a good fighter, so I didn’t expect to knock him out so fast.

He’s strong so I was prepared to go all 12 rounds.” Casimero said.

“I’m the real monster. Naoya Inoue is scared of me. You’re next. I would have knocked out anyone today,” Casimero said.

“If Inoue doesn’t fight me, then I’ll fight Guillermo Rigondeaux, Luis Nery, or any of the top fighters.”