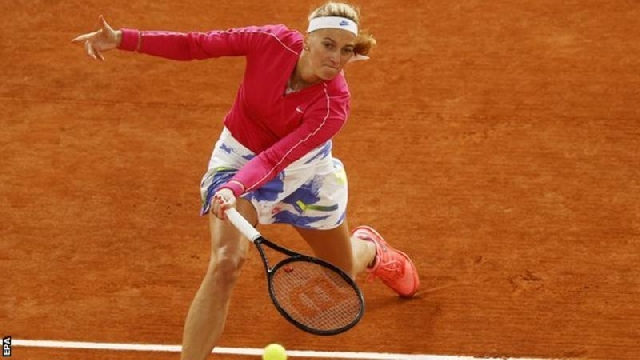 Petra Kvitova underlined her status as one of the French Open title favourites with a 6-2 6-4 win over China’s Zhang Shuai in the fourth round.

The seventh seed, who has yet to drop a set at the tournament, needed 85 minutes to see off the 31-year-old.

The Czech got on top of Zhang by breaking at the start of both sets, two of her four breaks during the match.

She was broken only once herself – while serving for the match – but then got over the line in the 10th game.

The 30-year-old is into the last eight at Roland Garros for the first time since 2012 and will now face German Laura Siegemund, who beat Spain’s Paula Badosa 7-5 6-2.

Kvitova struggled with her serve at times, especially in the second game of the second set where she made successive doubles as the roof closed in Philippe Chatrier. However, her fierce ball-striking from the baseline often overwhelmed the world number 39.

Her only other wobble came when she looked to finish off Zhang in the eighth game of the second set, but made three unforced errors as she dropped serve.

“It was difficult and a tough one,” Kvitova said. “She served well and played aggressive. I’m happy for the end.

“I’ve been lucky enough to play on all three big courts. The conditions changed today from windy and cold to like playing indoors when the roof closed.”