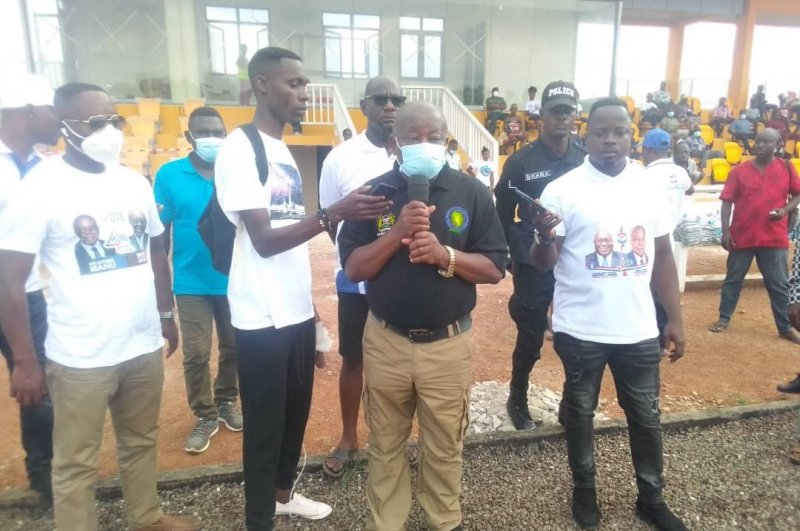 The Kwaku Agyemang-Manu Peace Cup, a football competition to promote peaceful elections before, during, and after the Election 2020 on Wednesday opened at the Dormaa-Ahenkro in the Dormaa Central Municipality of the Bono Region.

The three-day competition organised by the Dormaa Football Association saw 20 Division two and three teams in the Municipality participating.

Performing the opening ceremony at the Dormaa-Ahenkro Youth Resource Centre (YRC), Mr. Kwaku Agyemang-Manu, the Minister of Health who doubles as the Member of Parliament for the Dormaa Central Constituency urged the electorate to retain the New Patriotic Party (NPP) in power to enable it to complete the phase of the YRC project.

“There are still works to be done at the Resource Centre. We have to complete works on the volley and tennis ball courts. We would lay tartan tracks and we can do this if you only vote us back to power”.

“Those of us in the other opposition parties, you can join us on an escort ride and vote for our party looking at our impressive achievements so far in government. After if you feel like joining us forever you are welcome,” he added.

Mr. Agyemang-Manu said there was a counseling centre where the youth would receive coaching and advice on the job options they intended to pursue as well as an Information Communication Technology (ICT) training centre to obtain skills in technology and communication.

He told the 20 teams who paraded the pitch that he was optimistic the development of the pitch would help to nurture the requisite sporting talents capable and competent to compete on global stage.

Mr. Alexander Obeng, the Chairman of the Association said the organisation of the competition was partly to raise awareness on the need to maintain national peace, stressing children were most vulnerable and likely to suffer the most in war.

He said it was also to prop up the teams in those two divisions, so they could start preparation towards the commencement of main league after its suspension following COVID-19 concerns.

The Chairman said the winner of the competition would receive a trophy and GH¢ 500. 00 and a set of jersey donated by Mr. Agyemang-Manu.

The other teams would also receive set of jerseys and GH¢ 200.00 for participation.