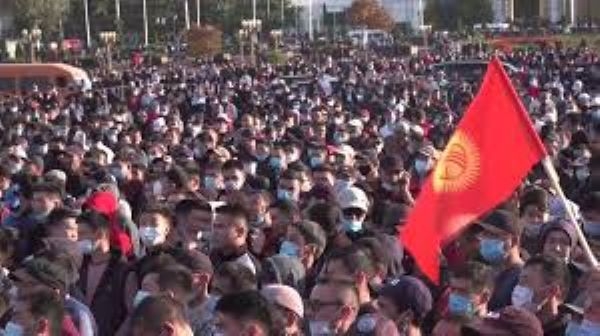 Protesters in Kyrgyzstan calling for the country’s parliamentary election to be annulled have broken into parliament in the capital, Bishkek.

Footage showed people in the office of President Sooronbai Jeenbekov, and throwing paper from windows. Parts of the building appeared to be on fire.

The break-in follows a day of clashes with police, who initially dispersed crowds with water cannon and tear gas.

The clashes come amid allegations of vote-rigging in last Sunday’s election.

One person died and nearly 600 were injured in the unrest, according to the Health Ministry.

President Jeenbekov has appealed for a return to order, accusing “certain political forces” of attempting to illegally seize power.

He has met opposition party leaders and said he would annul the results of the election if necessary.

Following the vote, only four parties out of 16 passed the 7% threshold for entry into parliament, three of which have close ties to President Jeenbekov.

On Monday, police used stun grenades to disperse thousands of protesters in Ala-Too square, before following them into nearby streets.

But demonstrators later flooded back into the central square before storming the parliament building, known as the White House.

Video footage shared on social media showed opposition protesters gaining access to the complex, some by climbing fences and others by pushing open the main gates. Later, smoke could be seen billowing out of the building.

Groups close to the president have been accused of vote-buying and voter intimidation – claims international monitors say are “credible” and a cause for “serious concern”.

On Monday, 12 opposition parties jointly declared that they would not recognise the results of the vote.

Later, President Jeenbekov’s office said that he would on Tuesday meet leaders from all 16 parties that competed in the election, in a bid to defuse tensions.

Opposition candidates also called on the Central Electoral Commission to cancel the results of the election.

One candidate, Ryskeldi Mombekov, told a crowd of more than 5,000 protesters on Monday: “The president promised to oversee honest elections. He didn’t keep his word.”

Mr Mombekov’s party, Ata Meken, had been confident of entering parliament, but in the end it was one of the eight parties that missed the threshold. Ata Meken leader Janar Akaev suffered a leg injury in the protests on Monday.

Protesters were also calling on President Jeenbekov to resign.

Thomas Boserup, head of the election observation mission of the Organisation for Security and Cooperation in Europe (OSCE), said in a briefing that although the vote had been “generally well organised”, allegations of vote buying were a “serious concern”.