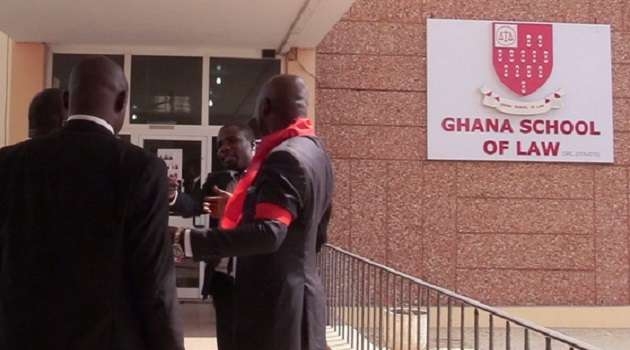 The National Association of Law students (NALS) has reiterated calls for the Attorney General (AG) and the Ministry of Justice to “confirm and arrange, as announced by the Finance Minister in the 2020 Budget Statement, the research on the implication of the current restrictive policy in accessing professional legal education in Ghana.”

The call by the NALS follows the release of the 2020 entrance examination results for the Ghana School of Law (GSL).

NALS in a statement issued on Monday, 5 October 2020, said the 1045 candidates that passed “while progressive and commendable, is ultimately not enough.”

“For law students across the country, it suffices as a cause for excitement and reassures many among our ranks that the GLC is committed to resolving the issues surrounding access to legal education.”

It, however, commended the Chief Justice Annin-Yeboah and the Acting Director for Legal Education Maxwell Opoku Agyemang for the “great development” in the 2020 results.

The association further stated that it believes there is more room for improvement in spite of the great progress made with regards to the 2020 entrance exams and emphasised its call for total reforms and expectations in legal education including “the decentralisation of professional legal training to the faculties that have the capacity to administer the training” and “the institution of a Ghana bar exam that allows independent candidate, such that any qualified LLB  holder has automatic opportunity to study the professional law course, even if unable to gain admission to the GSL, by entrance examination success, by finding their own tuition to take the qualifying Bar Exam within three (3) years a position the Attorney General and Minister of Justice found acceptable in 2018 in response to a petition.”

The NALS further congratulated successful candidates and called “on same to comply with the GSL requirements by the announced date.”

It added that it “understands the pain and disappointment of an unsuccessful attempt and, reiterates the commitment to pursue reforms to ensure better access to legal education for all.”

Thousand and forty-five law students have passed this year’s entrance examination paving the way for their admission to the GSL.

This is out of a total number of 2,720 candidates that sat the exam.

The results of this year’s exam were of public interest due to the mass failure that was recorded last year and previous years.

There was a similar magnitude of failure the previous year (2018).

Unhappy with the outcome, the law students demonstrated on Monday, 7 October 2019 to demand reforms in legal education in the country.

Inclusive education must be a shared responsibility – Mrs Twum-Ampofo