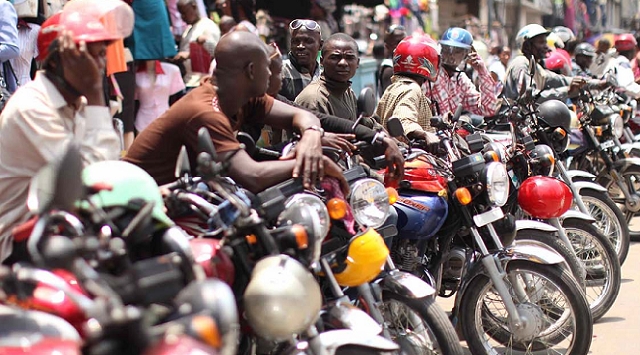 Okada is widespread in Ghana

The Minority Leader of Parliament, Mr Haruna Iddrisu, has said legalising and regulating Okada business will not have any adverse effect on the employment and opportunities of commercial transport drivers.

Addressing a meeting of members of garage associations at Sunyani Magazine in the Bono Region on Tuesday, shortly before the flagbearer of the National Democratic Congress (NDC), Mr John Dramani Mahama, announced the suspension of his campaign at the same meeting following concerns about the provisional voter register, the Minority Leader explained that Okada riders and commercial drivers already operate side by side, and that has not dwindled their opportunities.

“I have heard the argument that, the Okada business will affect GPRTU and transportation.

“But that is not true because even today, Okada is working but all that His Excellency John Dramani Mahama is seeking to do, is to legalise it so that there is harmony and coexistence with GPRTU”, the Tamale South MP said.

The Minority Leader said the NDC’s manifesto, dubbed ‘People’s Manifesto’ for this year’s election, has good news for members of the garages association, including providing training opportunities for those in the local automotive industry to keep abreast of modern trends in the automobile industry.

He said the next NDC government will also collaborate with members of the garages association to provide state-sponsored apprenticeship training for the youth, as part of efforts to equip them with employable skills.

Mr Iddrisu said the NDC’s manifesto has started working already, even though the party is yet to take over the reins of government, pointing out that the government has begun implementing portions of the People’s Manifesto.

The Minority Leader, therefore, urged the electorate to vote for Mr Mahama in the December 7 general elections to enable the NDC execute its manifesto for the benefit of the people.

Just recently, the National Concerned Drivers Association of Ghana threatened to vote against Mr Mahama if he fails to cancel his promise to legalise the operations of Okada riders across the country.

In a statement issued by the association and co-signed by its National Secretary Nana Owiredu, Public Relations Officer (PRO) David Agboado and National Chairman Paa Willie, the group said it had “carefully studied the manifesto of the National Democratic Congress on the legalisation of Okada” and demanded that NDC take “a second look at their manifesto promise of the legalisation of Okada” in the country.

According to the association, “Okada legalisation is a threat to human livelihoods” as “the legalisation will not only endanger lives but rather create havoc and mayhem on the roads for both commercial and private drivers.”

The Association also noted that: “On our roads, Okada riders regularly break our tail lights, mirrors and, sometimes, scratch our cars and ride away leaving us to bear the cost”.

“Fellow Ghanaians, when we sit for the NDC to legalise Okada, then we are pushing for more road accidents and casualties on our roads.”

The group said “as an association, we are expecting the NDC to bring out solutions to curb the rampant casualties on our roads but not to add up problems”.

“Our livelihood comes from the roads, hence we cannot afford to support any attempt to make it unsafe for our passengers, ourselves and families. Statistics from the Ghana Highway authority indicates that the high rate of motorcycle accidents is claiming lives of breadwinners.”

It added that as an association, it has declared its “total rejection of the legalisation of Okada in Ghana” and called on all well-meaning Ghanaians to resist it, too.