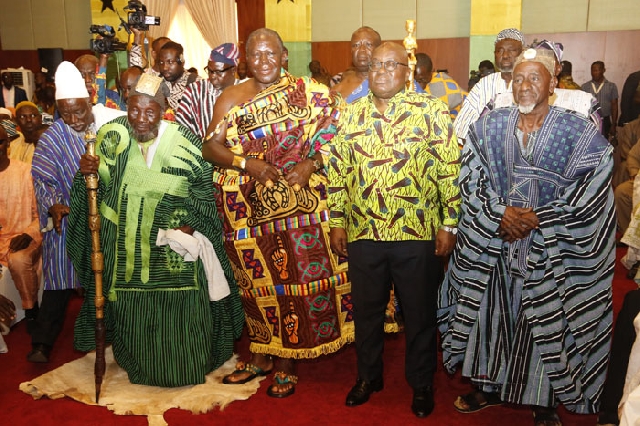 A former Minister of Chieftaincy, Dr Henry Seidu Danaa, has suggested an amendment of Ghana’s 1992 Constitution to allow chiefs to actively take part in partisan politics so as to do away with the current situation where they flout the law and nothing happens to them.

Article 276 of the 1992 Constitution says: ‘(1) A chief shall not take part in active party politics; and any chief wishing to do so and seeking election to Parliament shall abdicate his stool or skin; (2) Notwithstanding clause (1) of this article and paragraph (c) of clause (3) of article 94 of this Constitution, a chief may be appointed to any public office of which he is otherwise qualified’.

Each election year, however, chiefs are seen and heard endorsing politicians of their preference.

Recently, the paramount chief of the Akyem Abukwa traditional area, Osagyefuo Amoatia Ofori Panin II, told President Nana Akufo-Addo, during his visit to the area, that Okyeman was satisfied with his good work and, thus, the jurisdiction says he was deserving of four more years in office.

Similarly, the Omanhene of Mehame traditional area in the Asutifi South constituency of the Ahafo Region, Nana Owusu Kontoh II, endorsed Mr Mahama when the flagbearer of the National Democratic Congress (NDC) visited his area.

The Asante monarch gave the admonition at a meeting of the Ashanti Regional House of Chiefs on Wednesday, 7 October 2020.

He said: “The chieftaincy institution is a very important one in this country, thus, its existence. It existed before Western democracy came to our shores but, I think, sometimes, we forget that we are chiefs and jump into the political fray and meddle with the politicians”.

According to him, “it will be problematic for chiefs to become like the politicians instead of being the institution the former rather should be running to in times of trouble for us to advise them and also serve as arbiters”.

“As chiefs, each of us has a preferred political party but just don’t show your political colours.

“Chiefs have the right to vote but the Constitution bars us from taking part in active politics or supporting one party against the other.

“This is because, as chiefs, we have subjects who belong to either side of the political divide in their jurisdictions. You are a chief for all of them and, so, you have to be neutral but when you get to the voting booth on election day, you are free to vote for whichever party you support”, Otumfuo said.

He added: “As chiefs, we work with the party in power for development and, so, we must all be cautious and guard against meddling in partisan politics so as to maintain the honour and dignity of the chieftaincy institution”.

In Dr Danaa’s view, however, it is better to amend to Constitution to allow chiefs to do what they are already doing despite its illegality.

“What prevents us from amending the Constitution?” he asked Abdul Karim Ibrahim, Executive Breakfast Show host of Class91.3FM on Thursday, 8 October 2020.

The former Minister of Chieftaincy said he is in favour an amendment “because, the worst thing is to allow it to continue to be in the Constitution, which is the supreme law and then we don’t respect it”.

“The Constitution is the highest law of the land; it’s supposed to be sacrosanct, so, if that law is saying ‘this’ and we are doing ‘that’, I don’t think it’s the best”, he observed.

Proffering suggestions about how to deal with chiefs who flout the Constitution as it currently stands, Dr Danaa, who is also a lawyer, said: “The way to handle it is what I call ‘silent diplomacy’”.

“In trying to solve a problem, don’t create a new one”, he said.

“The other day, somebody was asking: ‘What about if chiefs are taken to court for openly endorsing a political party, for breaching the Constitution?’ I don’t think that’s the best way to go but there are ways to handle it”, he noted.

He said: “For instance, instead of the radio stations just discussing it, what prevents us as a nation from having a fora of chiefs with members of the government and members of parliament to raise the matter in a national forum? That, I think, is the best thing to do and then chiefs who think it’s right to do politics as a chief, will be made to talk and there will be a moment of truth but now, it looks as if the topic is being sidelined and I think that’s probably why Otumfuo came out to talk about it”.

He noted that “chiefs are human beings; they have their opinions but the difference here is publicly” taking part in active partisan politics.

“And, you can’t tell me it was any British colonial governor who forced it on us. … It’s us, the people of Ghana, who adopted this Constitution and put it there. So, you ask yourself: how come that we are now moving away from the Constitution? If we don’t want it, legally the right thing to do is amend it and change it but to have it in constitutional law and not stick to it, it’s like we are insulting ourselves. And it doesn’t help us.

“People have different interpretations on active partisan politics but the concern I’m sharing is that, when these things happen, there should be ways of handling them”, he said.