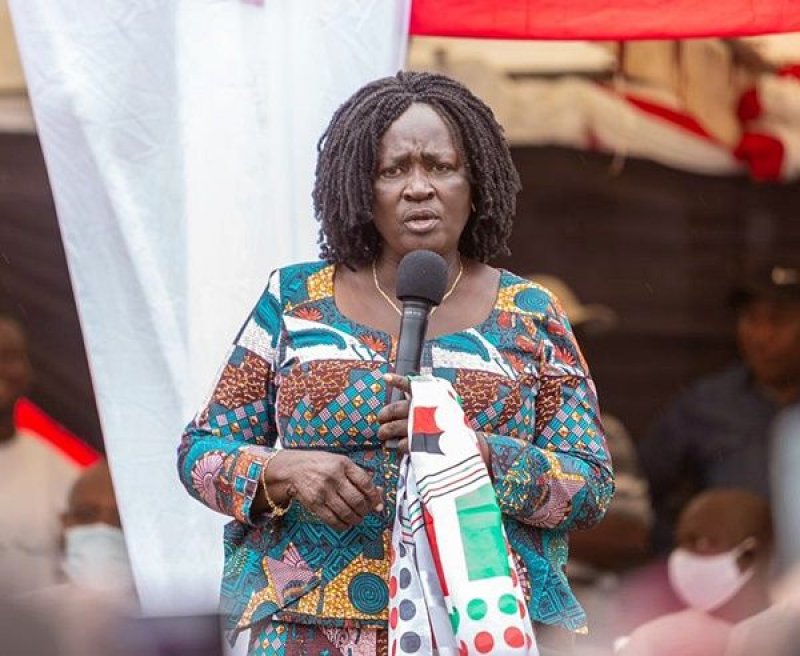 “Our activities should not be characterized by violence and disorderliness since we are not at war with each other.

“Let us not spill blood over our political differences, but think of the overall interest of the citizenry, stability and development of the nation,” Prof. Naana Opoku-Agyemang advised.

She made the call when she paid a courtesy call on Barima Osei Hwedie II, Chief of Ejura in the Ashanti Region, as part of her campaign tour to interact with traditional authorities, traders, students, women groups, the youth and the university community.

The NDC Presidential Running Mate said politics was about addressing the needs and helping to uplift the quality of life of the Ghanaian.

“We have a responsibility to always ensure that the contest of ideas does not in any way result in confusion,” she noted.

Prof. Naana Opoku-Agyemang is on a six-day working visit to solicit votes for the party in Ashanti, where the NDC has three of the 47 constituencies – Asawase, Ejura-Sekyedumase and Sekyere Afram Plains.

Accompanying the former Vice-Chancellor of the University of Cape Coast (UCC) is a team of some of the NDC’s leadership, including Mr Alex Segbefia, a former Minister of Health and Dr Samuel Sarpong, former Regional Minister.

The others are Nana Akwasi Andrews, the Regional NDC Chairman and Mr Okudzeto Ablakwa, Member of Parliament (MP) for North Tongu in the Volta Region, and also a former Deputy Minister of Information.

The NDC garnered 503,497 votes, representing 23.32 per cent of the total ballots cast in the presidential race of the 2016 general elections.

It is campaigning in this year’s elections with the hope to win more seats to further strengthen the party’s presence in Parliament.

The campaign tour also saw the NDC Presidential Running Mate pay a courtesy call on the Chief of Sekyedumase, Nana Antwi Boasiako II, and Nana Apau Wiafe Ababio Sanwansa, Chief of Hemang, where she outlined the party’s vision to the chiefs and people.

Barima Osei Hwedie lauded the NDC Running Mate for her humility and asked political parties to address issues in their campaign rallies.