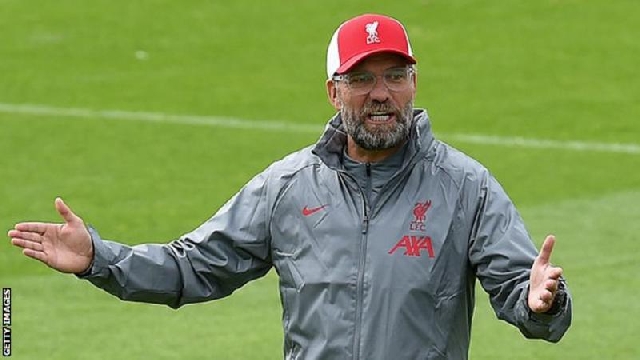 Liverpool manager Jurgen Klopp says he was “surprised” by the decision to revert to three substitutes when the Premier League starts this weekend.

Premier League managers were allowed to name 20 players and make five substitutions when the 2019-20 season resumed from its coronavirus shutdown.

But unlike other leagues in Europe, the Premier League will revert to squads of 18 with three allowed changes.

“My concern is only about player welfare and nothing else,” Klopp said.

“I don’t know why we had to discuss it. The whole of Europe is doing it.”

Champions Liverpool host promoted Leeds on Saturday (17:30 BST) and given the season starts late because of the disruption caused by coronavirus, Klopp is concerned players will face new demands in completing a campaign in a condensed period.

“I thought from a common sense point of view that this year, and only this year, not forever, we would have 20 and five.

“It’s not about having an advantage because we can bring five top players on. I don’t like that we dealt with this thing based on the wrong facts.

“It’s about player welfare and it’s about having the highest quality in the games for all teams. I was really surprised when I heard the league decided against it.

“So you have to rotate more, you need numbers, I don’t know if you need more players but you need fit players to rotate and face these challenges.”

Klopp’s first challenge of the season against Marcelo Bielsa’s Leeds side arrives as clubs continue to conduct business in the summer transfer window.

Liverpool’s lack of an eye-catching acquisition has been hotly debated by some supporters and Klopp refused to be drawn on links with Bayern Munich’s Spanish midfielder Thiago Alcantara.

“It’s nice we are linked but that is pretty much it,” added the German, who has only signed left-back Konstantinos Tsimikas from Olympiakos this summer.

“A good player linked to a big club, that is nice and all that I can say on it.”

Klopp also said he is yet to decide which players in his squad can leave on loan and insisted midfielder Georginio Wijnaldum was “absolutely fine” at the club despite being in the final nine months of his contract and heavily linked with a move to Barcelona.

“I can’t speak about a few years, but it’s all good for the moment,” Klopp added. “You know the situation – between me, Gini and the club, everything is fine.”

‘We will attack title, not defend it’

Klopp’s side led last season’s Premier League from August until its delayed completion in July and ended with an 18-point gap over Manchester City in second place.

Despite the cushion, City start the new campaign as odds-on favourites with bookmakers to regain the title.

“Winning the league last year is the best problem you can have,” Klopp added. “If it’s a problem then I don’t know it, but everybody else is giving me a feeling that it should be a problem.

“I didn’t understand the term ‘defend the title’. Maybe I’m not smart enough.

“We showed we can go for it in the last two years. We don’t take that for granted, but if the title is out there then we attack it. That’s how I’ve always understood it so why should that change?

“It doesn’t mean we will win it but it is there to be attacked. That is how I understand it. No games, no points, let’s go for it.”