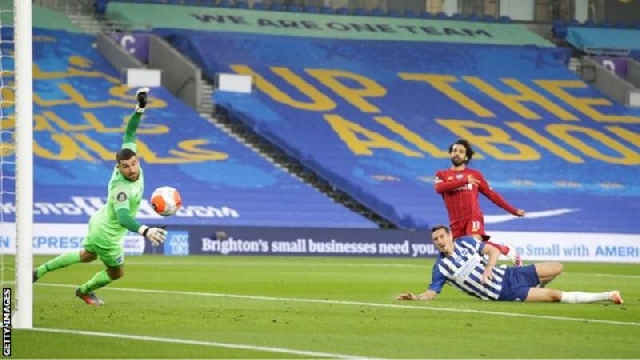 Liverpool continued their relentless pursuit of a Premier League points record with victory over Brighton at the Amex Stadium.

The newly-crowned champions looked on course to secure three more points with ease when they went two up inside eight minutes as Brighton, with sights set on Premier League safety, made a nightmare start.

Brighton, however, fought back with real spirit and fully deserved to pull a goal back when Leandro Trossard fired a crisp finish past Liverpool keeper Alisson from the impressive Tariq Lamptey’s cross.

Liverpool manager Jurgen Klopp stopped Brighton’s progress with some astute substitutions and a corner from one, Andrew Robertson, was headed in by Salah for his 19th league goal of the season.

Brighton manager Graham Potter, whose side are edging towards preserving their top-flight status, were left to rue those opening minutes while Liverpool – with 92 – close in on Manchester City’s 100-point Premier League landmark.