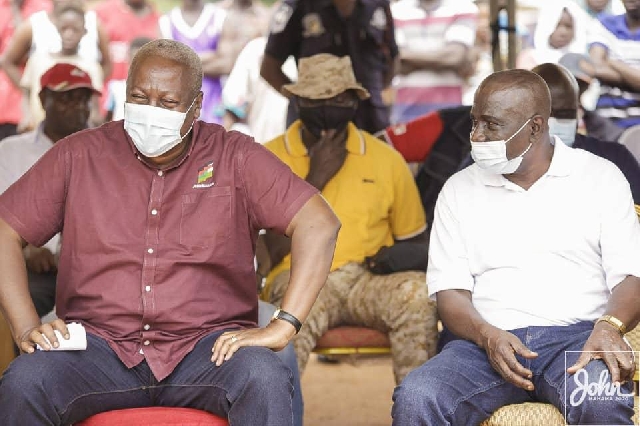 The flagbearer of the National Democratic Congress (NDC), Mr John Dramani Mahama, on Monday, 21 September 2020, began a four-day tour of the Bono Region.

Accompanied by the party’s General Secretary Johnson Asiedu Nketia, Campaign Manager Professor Joshua Alabi, former Chief of Staff Julius Debrah and Special Aide Joyce Bawah Mogtari, the former President made his first stop at Nchira in the Wenchi constituency, where he interacted with farmers and chiefs.

In his remarks, Mr Mahama explained his plans to modernize agriculture through improved services to be provided by mechanization centres in various districts. According to him, the centres will be established in all farming zones to help increase yield and income levels of farmers.

Mr Mahama also pledged to prioritise the completion of all abandoned projects, particularly in the road, education and health sectors.

He noted that the stoppage of work on various projects by President Nana Akufo-Addo has not only caused financial loss to the state but also, worsened the plight of contractors and the beneficiary communities who have been cruelly affected by these stoppages.

He, therefore, pledged not to repeat Nana Akufo-Addo’s mistake of abandoning state assets and will continue any development initiative he inherits from the current administration.

Mr Asiedu Nketia spoke about the NDC’s plan to roll out a National Apprenticeship Programme, explaining that the initiative will target some 500,000 youth who will benefit from skills training and receive start-up packs to start their own businesses.

He also noted that the John Mahama administration will set up agro-processing factories to add value to crops for export to boost revenue generation.

The agribusiness sector, he added, will open up job opportunities in the value chain.

President Mahama will visit Subinso, Wenchi, Badu, Nsawkaw and Brohani on Monday, where he will among others interact with cashew farmers.