Mahama is a ‘legend, man of vision, integrity’; he brought Dubai to Ghana – Gomoa Nyanyano chief 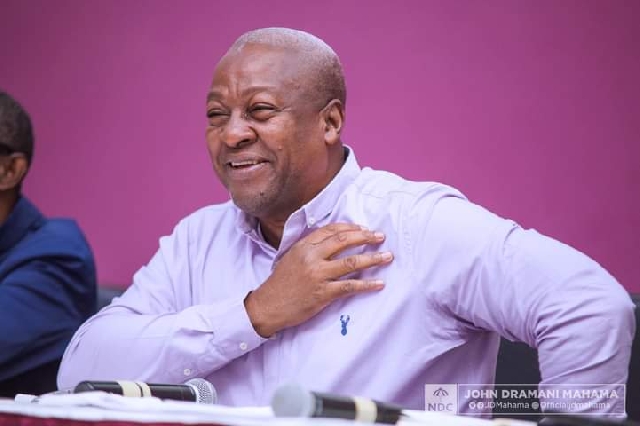 The chief of Gomoa-Nyanyano, Sarki Awudu Issaka Giwa, has said the legacy of the flagbearer of the opposition National Democratic Congress (NDC) is still reflecting in the lives of Ghanaians.

He commended the NDC flagbearer for the projects he initiated while in government to make the lives of the people better.

Chief Sarki Giwa made the comments when Mr Mahama paid a courtesy call on the chiefs and people of the area.

The visit to the area by the NDC flagbearer forms part of his four-day campaign tour of the Central Region.

He described Mr Mahama as a man of vision and integrity.

“This our father-for-all President is a man of vision, a man of integrity; this man is a legend. This man is a legend, and this man has left a footprint that all the time, the footprint is reflecting. Our father made us see Dubai in Ghana. If you go to Circle Interchange, we have never seen some before but we saw it in his time. May Allah bless you”, Chief Giwa said.

He complained about how road works that were started by Mr Mahama have stalled since the Akufo-Addo government took over from him.

“Our road network is bad; we’re tired. Our cars have all broken down. This man came here four years ago, we’re the people who received him, this man promised to fix the roads, he did it, the project was almost complete except for asphalting it and then God made a little change and then the project stalled.

“This man had fixed the road from Kasoa to Kakraba; from Kakraba is just a short journey but this people have closed their eyes, making pregnant women, old men, old women in the village are suffering. We need to use this word without fear because we own this Gomoa Nyayano and Gomoa entirely.”

The chief assured the NDC flagbearer that they would work to rally more support for him in the upcoming December polls.

“Wherever that we are, we’ll go and tell them you’re a Zongo man; try to vote for President John Mahama.”