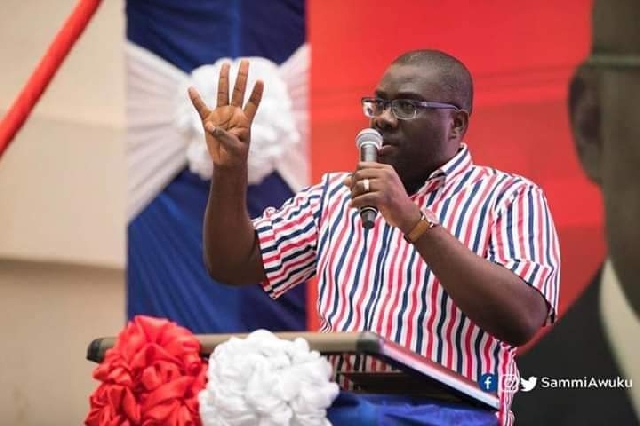 The governing New Patriotic Party has said former President John Mahama, through certain comments he made recently, has questioned the judgement of Ghanaians in not voting for him as President in the 2016 general elections.

“Last week, when John Mahama went to the Savanna Region (yes, the region he promised but could not deliver and Akufo-Addo promised and delivered). There, he out-doored his campaign message for 2020 which we want Ghanaians to study carefully. He says, ‘On December 7, 2020, God is going to speak. The people of Ghana are going to speak. And the NDC government will come back and continue the good work that it started’”, the National Organiser of the NPP, Mr Sammi Awuku told journalists at a press conference.

Ghanaians, he added, “the former President is questioning your judgment. The verdict you delivered to him 4 years ago. Yes! He is saying to you that he did not make a mistake with his incompetence when he was in office, first as Vice President from January 2009 to July 2012 and second, as President from July 2012 to January 2017. But that you rather made a mistake with your poor judgment by giving him the biggest defeat ever suffered by any incumbent president in this country’s history”.

“The question Ghanaians are asking you, former President John Mahama, is this: what good work were you doing that Ghanaians should vote for you to come back to continue? As Vice President Mahamudu Bawumia asked yesterday, “What did John Mahama do for the youth of Ghana in the 8 years that he was in office?” What was so good about John Mahama’s leadership that he believes today that he deserves to come back to continue?”

Read below parts of the statement:

•             Is the suffering he visited on Ghanaians then the good old days that he wants voters to remember?

When John Mahama says Ghanaians should bring him back to continue with the good work he was doing what exactly does he mean?

•             Is it his record for being the only Vice President to be investigated by his own President for alleged corruption, specifically over an airplane deal?

•             Is it his decision to give a GHS4.6 billion interoperability contract to his friend Roland Agambire, only for the NPP to come and cancel it and do the same thing for $5 million?

What is this good record that he is so proud of?

•             Is it his indecision over the banking crisis that he himself had identified in his 2016 State of the Nation address but did not have the courage to do anything about?

What is the good work that Mahama wants Ghanaians to remember with nostalgia – what were the good old days?

•             Is it his decision to dish out inflated contracts without even knowing how to pay for them, leaving it for the NPP to come and settle the arrears?

•             Is it his decision to build two flyovers (Kasoa and Kwame Nkrumah Circle) at a cost much higher than what NPP is using to build four bigger flyovers, Tema, Pokuase, Obestebi -Lamptey and Tamale?

What is this good record that John Mahama is using as a reference point to be voted for on December to come back to continue?

•             Is it a record that was so good that his own Vice President, the woefully-underutilised Kwesi Amissah-Arthur (according to Kwamena Ahwoi), was so eager to contest his former boss John Mahama for the 2020 NDC leadership position before his sad and sudden death?

We have seen Candidate John Mahama’s campaign strategy. He is comparing 8 years of NDC (the Mills-Mahama and Mahama-Amissah Arthur 8 years) to the less than 4 years of NPP under Akufo-Addo and his most-able Veep, Dr Mahamudu Bawumia.

Candidate Mahama has decided that for 2020, just like he did in 2016 and failed, he is once again going to use infrastructure as his biggest achievement to campaign on. This means, that he is using everything, including contracts awarded under President Kufuor, like the many district hospitals up and down the country, and executed under President John Atta Mills, and other contracts, like the University of Ghana Medical School, started under Mills and completed under Akufo-Addo, and claiming all of them as all his doing and his alone.

We have no problem with that because we know, and the evidence will show that the NPP under Akufo-Addo has achieved more in providing infrastructure for communities up and down the country under just 4 years than John Mahama and his NDC did in 8 years.  We have the evidence and we shall be sharing them with the Ghanaian people very soon. And they won’t be in a green book.