‘Mahama was very incompetent; it’s a fact; he chopped all the meat and left us bones’ – Bawumia 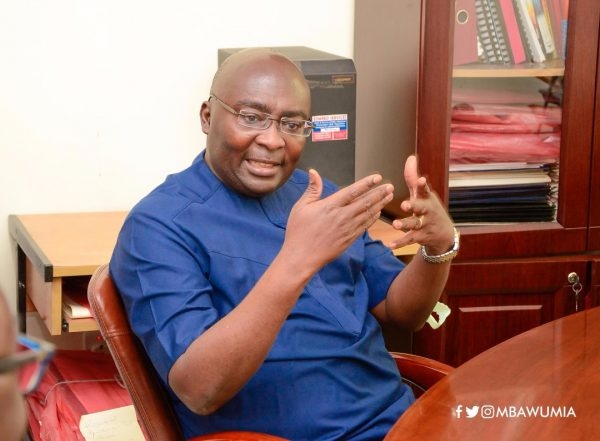 Speaking at the inauguration of ‘Aspirants Unite for Nana’, a group of defeated parliamentary aspirants of the governing New Patriotic Party, Dr Bawumia said: “John Mahama managed our economy with incompetence”.

“He was very incompetent at managing the economy and it is a fact”, Dr Bawumia stressed.

“They [NDC] chopped all the meat and left us with bones”, he alleged.

In his view, the flagbearer of the National Democratic Congress “has also proven not to have credibility”.

“He’s a man of no credibility and no vision”, Dr Bawumia asserted.

Dr Bawumia’s attack on Mr Mahama comes days after his boss, President Nana Addo Dankwa Akufo-Addo, said the former President has proven, over time, to be inconsistent, as he flip-flops on issues of national development.

Speaking at Bibiani at the end of his 3-day tour of the Western-North Region on Saturday, 26 September 2020, President Akufo-Addo stated that it is important for the credibility of the country’s public discourse that persons in the country’s public space are seen to be consistent in their views and advocacy.

According to President Akufo-Addo, “when the Bill governing the establishment of the National Health Insurance Scheme were being passed in 2003, I was in Parliament.

“I witnessed the NDC MPs, which included Mahama, kicking against it by staging a walkout”.

“When President Kufuor successfully implemented it, Mahama and Mills said they would implement a one-time payment of the National Health Insurance Scheme.

“Today”, the President noted, “Mr Mahama says he is bringing free primary healthcare if voted for”.

“Can we trust him?” he asked the crowd.

“Did he fulfill his promises for which reason we should believe that he would fulfil this? No, we cannot trust him”, the President insisted.

Touching on the cancellation of allowances for teacher and nurse trainees, the President noted that students and, indeed, all well-meaning Ghanaians, asked the former President to restore the allowances to no avail.

“We begged him to restore them but he was adamant to the extent that he said if that would mean he losing the 2016 elections, so be it.

“I restored the teacher and nurse training allowances, and now he has changed his tongue again.

“He says he will now continue to pay teacher and nurse training allowances! Can we trust him? No way!”, President Akufo-Addo stressed.

On the Zongo Development Fund, which, in the view of the President, is bringing development to the people in Zongo communities, Nana Akufo-Addo recounted how former President Mahama said the use of the Zongo Development Fund for the provision of ICT facilities and AstroTurf pitches represented a misappropriation of funds, only for the former President to turn around and promise the construction of mortuaries and legalising ‘Okada’ for residents in Zongo communities.

On Free Senior High School policy, the President recalled how Mr Mahama stated that the pledge by the NPP to provide Free SHS was a mere political gimmick and just lies, as the implementation of the policy can only happen in 20 years.

“Two years ago, he said if you had GHS2 billion, you shouldn’t be spending it all on Free SHS. Today, he says that if he is given the mantle of leadership, he will continue with the implementation of Free SHS. Can we trust him on this? No!”, President Akufo-Addo continued.

“He is inconsistent and a flip-flop; a trait not seen in Akufo-Addo.”

The President, therefore, asked residents of Western-North to continue to have trust and confidence in him, adding: “I will always be truthful to you, and work for the unity, progress, prosperity and development of our nation.”

With the NPP having only three out of the nine seats in the Western-North Region, the President expressed the hope that the 2020 elections will see a change in fortunes for the NPP.

“I pray that massive changes occur this time around for all of you to be part of the elephant family. You will never regret being a part of the NPP.

“I urge you to vote Four More for Nana”, he said, and appealed to the constituents of the Bibiani to vote massively for the NPP’s parliamentary candidate, Mr Alfred Obeng.