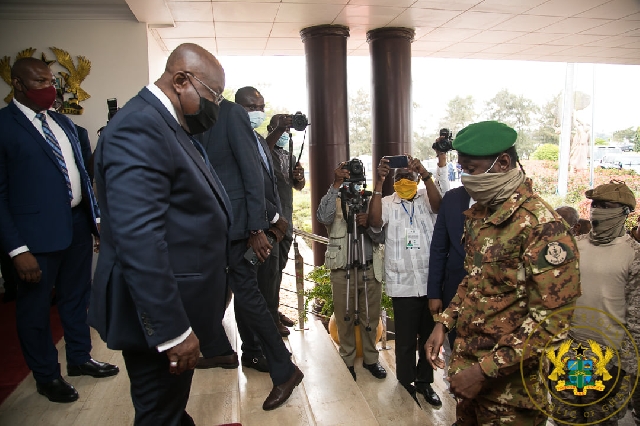 Nana Akufo-Addo and leader of the Junta meeting in Accra

The Economic Community of West African States (ECOWAS) has called on the coup leaders of Mali to return the country to civilian rule immediately at a mini durbar convened by the Chairman of the West African bloc, Nana Akufo-Addo, President of Ghana, in Accra on Tuesday, 15 September 2020.

The National Committee for the Salvation of the People (CNSP) formed by the coup plotters is to be dissolved immediately the civilian transition is put in place.

According to ECOWAS, the length of the political transition will be 18 months maximum with effect from Tuesday, 15 September 2020.

ECOWAS noted that it will lift sanctions imposed on Mali immediately the transition civilian President and Prime Minister are effectively designated.

These were contained a communiqué released by ECOWAS after its meeting in Ghana’s capital.