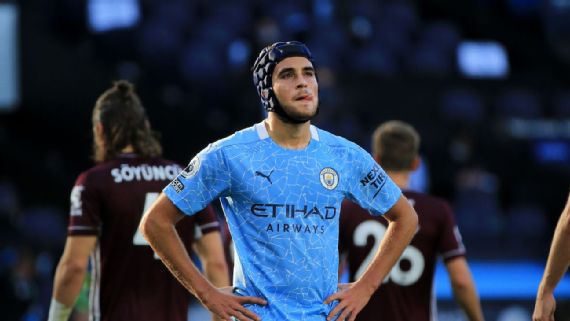 MANCHESTER — Manchester City are fortunate they have already agreed a deal for Ruben Dias because Benfica might have been tempted to put the price up after Jamie Vardy ran riot in Leicester’s 5-2 victory at the Etihad Stadium.

Dias is set to move to Manchester in a deal that will cost around €71 million while Nicolas Otamendi is heading in the opposite direction in a separate agreement worth around €15m. For Pep Guardiola, it cannot be completed quickly enough.

Against Leicester, he watched City lose their opening home game of a top-flight season for the first time since 1989. He also watched Vardy turn it on against his team again.On a day when Guardiola was forced to start without a recognised striker because of injuries to Sergio Aguero and Gabriel Jesus, Vardy showed the value of a bona fide poacher. He scored three times — two from penalties he won himself — to take his tally against Guardiola’s City to nine. No player has scored more.

“We struggled with Vardy,” said Guardiola afterwards in an early attempt at understatement of the season.

It looked like City were heading for a routine home win when Riyad Mahrez scored against his former club after three minutes with a spectacular strike which arrowed into the top corner. Then Vardy took over.

Ten minutes before half-time, the 33-year-old was bundled over after a clumsy challenge from Kyle Walker and dispatched the penalty high into the net. His second shortly after half-time was the best of the lot.

He looked short of space when Timothy Castagne‘s low cross from the right reached him at the near post but it didn’t matter as he produced an impudent flick to lift the ball over a bemused Ederson. Vardy’s third was another penalty as City failed to deal with his lightening movement again and Eric Garcia — having a good game up until that point — clipped his heels.This time he went to Ederson’s right to become the oldest player to score a Premier League hat trick since Teddy Sheringham in 2003.

James Maddison came off the bench to make it four by beating Ederson from 20 yards and although Nathan Ake pulled one back with his first City goal, Leicester made it 5-2 with their third penalty of the afternoon after Benjamin Mendy had fouled Maddison. Vardy had already limped off so the responsibility fell to Youri Tielemans to ensure Leicester became the first team to score five goals against a side managed by Guardiola in his 686 games as a coach. Leicester, meanwhile, are top of the league after three wins from three.

“We played really good in the first 30 minutes,” said Guardiola. “We scored early on and I think they defended so deep, so it was not easy.

“Of course when you have the players to attack the box that we need. We were anxious to attack and say we are not creating chances, we got nervous and after we gave three penalties away. And when you do that you cannot do it.”

Guardiola will hope the solution to his problems is already on the way. City looked at Napoli‘s Kalidou Koulibaly and Atletico Madrid‘s Jose Gimenez to strengthen the defence but after being put off by the price tags, director of football Txiki Begiristain has instead turned to Dias.

The Portugal international has been scouted by Manchester United in the past but City are the ones who will prise him away from Benfica — helped in part by their willingness to take Otamendi.

Aymeric Laporte will help, too. The Frenchman is yet to play this season after testing positive for COVID-19 over the summer and was only fit enough for a place on the bench against Leicester. After another full week of training, he can expect to be back in the team for the trip to Leeds United on Saturday. Judging by Guardiola’s almost constant instructions to Ake, the Dutchman — a £40m signing from Bournemouth — is taking time to get up to speed.

It didn’t help Ake and the rest of the defence that Guardiola decided to swap Fernandinho for 17-year-old striker Liam Delap with the score at 1-1 but the Spaniard cannot be held responsible for the absence of basic defending. All three penalties were conceded after his players got the wrong side of a Leicester attacker.

Asked after the final whistle about Dias’ impending arrival, Guardiola said: “It’s not official. Let me wait until it’s official, then I’ll give you a statement.” After a disastrous day, he will hope it’s sooner rather than later.