Manchester United ‘have to take it to next step’ – Harry Maguire 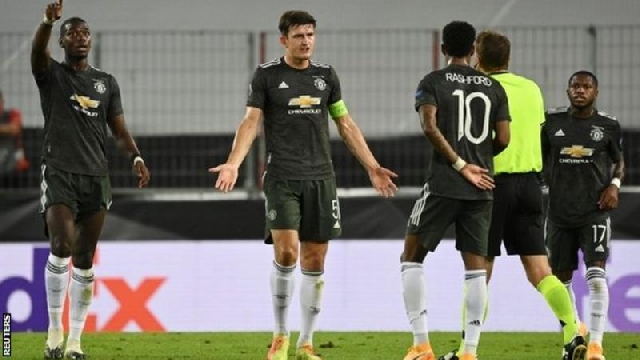 Manchester United defender Harry Maguire says they “have to take it to the next step” after losing the Europa League semi-final 2-1 to Sevilla.

The Red Devils – who have not won a trophy in three seasons – lost in the semi-finals of the EFL Cup, FA Cup and Europa League this season.

“Losing is not acceptable. Getting to semi-finals isn’t acceptable,” Maguire told BT Sport.

“[Winning a trophy] will happen soon. We want to win it as soon as possible.”

United led through a Bruno Fernandes penalty, but goals from former Premier League players Suso and Luuk de Jong sent Sevilla into the final for a record sixth time.

Sevilla keeper Yassine Bounou was the man of the match, with six saves in a frustrating night for United in Cologne.

Maguire said: “The best team lost. They punished us for missing chances. We conceded from two crosses which is not good enough.

“We worked our socks off and deserved to win and get through. We fell short in a semi-final for the third time this year.

“Perhaps that bit of inexperience cost us – we shouldn’t have conceded that second goal.”

United manager Ole Gunnar Solskjaer – whose last success was the 2013 Norwegian Cup with Molde – said: “It’s very disappointing, hard to take. We played fantastic stuff at times and created chances but couldn’t get the goal we deserved.”

United did not make a substitution until the 87th minute.

“At times, in games like this, when you create so many chances and openings, it is difficult to take players with goals in them out of the pitch,” said Solskjaer.

“We need to strengthen our squad depth of course. I cannot say when or if transfers will be done but we are looking at it. We have to be 100% sure when we make those deals.”

It is the longest trophyless run for United – who finished third in the Premier League table – in 30 years.

Fernandes argued with defender Victor Lindelof after the second Sevilla goal, with United failing to deal with Jesus Navas’ cross.

“It’s normal when you concede,” said goalscorer Fernandes. “It’s not about me or Victor. What happened between me and Victor is normal. It will happen many more times in football. We need to see the mistakes everybody did and improve.”

‘United can challenge for title with better defence’ – analysis

BBC Radio 5 Live pundit Stephen Warnock said: “If United shore up the defence, with the quality they have up front now, I definitely think they can push for the league next season.”

United – who have not won the title since manager Alex Ferguson retired in 2013 – finished this season on 66 points, 33 behind champions Liverpool.

“I would look at bringing in one of the two centre-backs from Sevilla tonight,” Warnock said. “The power of Diego Carlos tonight – I’d probably be looking at him.

“A lot of people got carried away saying this team can compete for the Premier League but they can’t. They have not got the depth to do that and we’ve seen that tonight.

“If Manchester United feel sorry for themselves they won’t have a good season next season. They have to be hungry, they have to come back with a desire.”

Former United midfielder Paul Ince said on BT Sport: “United deserved to win but it is about being ruthless. You have to take those chances. Will they give Solskjaer the time?

Owen Hargreaves, another ex-United midfielder, said: “Winning titles isn’t about being the best team, it’s about being there at the decisive moments. You need players who can make a difference.

“If Jadon Sancho is in there, United will probably win the game.”

‘Simply not good enough’ – how you reacted

Ben: Many times in recent years we’ve won in similar style to Sevilla tonight – riding luck defensively & capitalising on mistakes. Now on the receiving end; just the way the cookie crumbles. The reality is – strangely – feeling hard done by tonight is a sign of progress.

James Dawes: Another poor display from Lindelof and Pogba. Poor decision making by Lindelof again costs us and I didn’t even know Pogba was playing.

Mike Crew: Three semi final defeats is simply not good enough & frankly unacceptable. Three seasons without a trophy is not good enough. This squad needs half a dozen new faces who are up to it; because a number of those we have are not.

Kris Jefferson: I’m sorry, but you can’t expect to challenge at the top competitions like this without taking your chances and losing your concentration when defending. No one to blame for that loss other than Man Utd