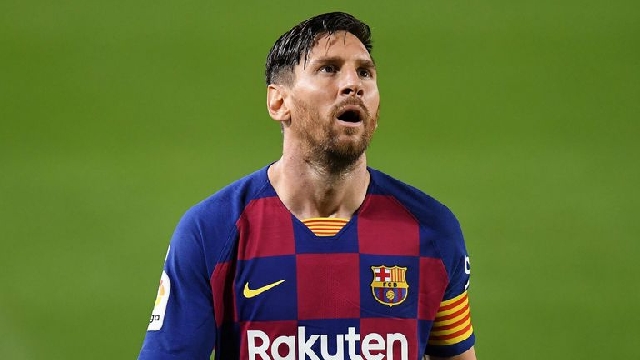 Lionel Messi – Manchester United are in position to make a move for the Argentine after he submitted a transfer request at Barcelona (Sport, August 26).

Philippe Coutinho – The Brazilian prefers a return to the Premier League and United are among a trio of clubs interested in the 28-year-old Champions League winner (Marca, August 26)

Jadon Sancho – Manchester United are ready to put their bid to sign the England international on hold for a year after being unwilling to match Borussia Dortmund’s £108m asking price for the winger. (Sunday Mirror, August 23)

An agreement on personal terms is believed to be holding up United’s move for Sancho (ESPN, August 20); United have still not made an official offer for Sancho. If they make a realistic offer – close to Dortmund’s €120m (£108m) asking price – it is thought Sancho would be willing to tell Dortmund he wants to leave (Sky Sports, August 17); The chief executive of Borussia Dortmund has insisted it is “set in stone” the England international will not be sold this summer and rounded on former United players Paul Scholes and Owen Hargreaves for claiming the German club were “bluffing” (Telegraph, August 16).

Isak Hansen-Aaroen – Manchester United are signing the young striker – confirmed by a glowing Instagram post from his Norwegian club Tromso (The Sun, August 22)

David Brooks – The Bournemouth playmaker has been a long-term target for United and they are considering making an approach this summer (Manchester Evening News, August 20).

Jack Grealish – United may off goalkeeper Sergio Romero in part exchange for Grealish (Daily Mail, August 20); The Aston Villa captain would welcome a move to United this summer (Express, August 13); Grealish is expected back at Aston Villa for pre-season training at the end of the month as United refuse to be pressured into meeting his £80m price tag (Daily Mirror, August 5); United are prepared to wait until late in the window before considering a move for Grealish as they push to sign Sancho (Daily Mail, August 4); United have cooled their interest in the Villa captain (Sky Sports News, July 28); The Villa captain is a target for United but has been warned he may not be a regular starter every week (Independent, July 28).

Issa Diop – West Ham are ready to sell Diop to Manchester United for a £45m transfer fee (The Sun, August 19).

Douglas Costa – Manchester United are looking at a double raid on Juventus for Costa and Alex Sandro (Daily Express, August 19); Manchester United are keeping tabs on Juventus winger Costa as they embark on their summer transfer business. While Jadon Sancho remains their No 1 target for that position, should that deal not come off, Costa is among the alternatives being considered by the club (Sky Sports, August 17).

Ben White – United have made contact with Brighton about their £50m-rated defender (The Sun, August 17).

Saul Niguez – United are set to make the Atletico Madrid midfielder their top transfer target this summer (Daily Mail, August 16); United are hoping to tempt the Spaniard into a switch to Old Trafford by offering him a contract worth £150,000 per week (Daily Star, August 15).

Paulo Dybala – Juventus are reportedly planning to offer the Argentine to United in a bid to sign Paul Pogba (Mirror, August 15).

Vinicius Jr – Manchester United appear to be switching their focus from signing Sancho to Vinicius Jr, but could face competition from Chelsea and Arsenal (Daily Star, August 13).

Kasper Schmeichel – United are weighing up a shock move for the Leicester goalkeeper to replace David de Gea as No 1 next season (The Sun On Sunday, August 2).

Callum Hudson-Odoi – United are considering lining up a shock move for the Chelsea winger (The Sun On Sunday, August 2).

Sandro Tonali – United are reportedly set to be knocked back by the Italian wonderkid, who is being chased by Inter Milan (Mail On Sunday, August 2).

Alexis Sanchez – The United forward has left the club on a free transfer to join Inter Milan on a three-year deal (Aug 6).What went wrong for Sanchez at United?

Angel Gomes – United have confirmed Gomes has not taken up the offer of a new contract and has left the club. The youngster has joined Lille but will l immediately go out on loan to Boavista after joining the Ligue 1 side (Aug 6).The latest on players linked with a Man United exit…

Chris Smalling – Inter Milan are keen on the United defender and may pay the £20m asking price for the 30-year-old, who has spent the season on loan at Roma (Metro, August 17): The defender still has a future at United – despite a year out on loan at Roma in Serie A (Mirror, Aug 16); Smalling leads Bruce’s wanted list this transfer window, having enjoyed a successful spell on loan at Roma last season, where he played 37 times to help them to a fifth-place finish in Serie A (Sky Sports, August 15); united are demanding £20m for Chris Smalling this summer, with Roma still desperate to snap him up (The Sun, August 14).

Paul Pogba – Juventus are reportedly planning to offer Paulo Dybala to United in a bid to sign the midfielder (Mirror, August 15); Pogba is expecting United to open contract talks once their Europa League campaign concludes (Sky Sports, Aug 13); The Frenchman is willing to make a dramatic U-turn by opening talks over a new contract at United (Daily Mail, July 9); Real Madrid are lining up a summer move for Pogba as part of their priority transfer business ahead of next season (Get French Football News, July 7).

Tahith Chong – The United winger is close to agreeing a deal to join Werder Bremen on a season-long loan (Sky Sports, August 15); United are open to allowing Chong out on loan amid reported interest from Bremen (Aug 6); Bremen have stated their interest in taking the United winger on loan (The Sun, Aug 6).

Dean Henderson – Manchester United are ready to ramp up the fight for the No 1 keeper slot by almost doubling Henderson’s wages (The Sun, August 19); Ole Gunnar Solskjaer has reportedly decided to loan out Henderson this summer and will stick with De Gea as his No 1 (The Sun, August 19); United want Sheffield United to pay all of Henderson’s wages next season (The Sun On Sunday, August 9).

Eric Bailly – The United and Ivory Coast defender has been offered to AC Milan, but the Italian side are not interested in a deal (Gazzetta dello Sport, Aug 7).

Sergio Romero – The goalkeeper could leave Manchester United for Chelsea, Leeds or Everton this summer (Daily Star, August 19); Romero wants to hold showdown talks with Manchester United over his future – with Dean Henderson heading back to Old Trafford (The Sun, July 31).

Joel Pereira – Manchester United are ready to send the Portuguese goalkeeper to Huddersfield Town on loan. (The Sun, August 25)

Dean Henderson – The goalkeeper and Manchester United’s negotiations over a new long-term deal for the goalkeeper are now at an advanced stage (Sky Sports, August 20).

Mason Greenwood – The 18-year-old’s form has earned a new £40,000-a-week contract at Old Trafford, just nine months after he signed his last (Sun on Sunday, July 19).

Timothy Fosu-Mensah – United will give the 22-year-old a chance to secure his long-term future at the club amid interest from clubs in Germany (Manchester Evening News, July 17).

Fred – The Brazil midfielder is open for talks over a new long-term United deal after a stunning turnaround in form (Sun, June 25).