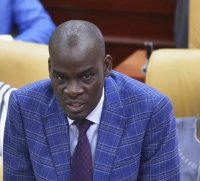 The group also demanded from the BoG the Inventory Report on the collapsed financial institutions in accordance with the Bank and Specialized Deposit Taking Institutions (SDTI) Act 2016, Act 930, Section 130(4).

The collapsed financial institutions included eight banks, over 400 small and micro finance institutions, 23 savings, and loan companies among others.

Mr Haruna Iddrisu, the Minority Leader made the call when he addressed the media in the Parliament House, in Accra, on issues relating to the collapsed financial institutions in the country.

He said section 130(4) of the law stated that the Receiver shall within one month of taking possession of a bank or SDTI and transmit a copy of the Inventory Report to the Bank of Ghana.

He, therefore, requested for the Inventory Report on the collapsed banks and micro finance and savings institutions, demanding to know whether the report had been remitted to the BoG.

“We demand respect to letter and spirit of the Bank and Specialized Deposit Taking Institutions Act 2016, Act 930… that this country is governed by law,” he added.

Mr Iddrisu also observed that section 130(5) of the law states the BoG shall publish the Inventory Report in two daily newspapers of national circulation and the BoG website, saying this has not happened and a grave breach of the law.

He further demanded greater responsibility and openness from the Governor, and the BoG as a regulator of the financial sector.

“We cannot run this country on whims and caprices of any person or individual, this country must be governed in accord with the law,” he said.

Mr Iddrisu also demanded to know the owners of the Consolidated Bank of Ghana (CBG) and if the GH¢450 million bond issuance money spent on the bank is an equity or a loan.

He said demonstrably, the government and in particular, the BoG has faltered and not respected the laws of Ghana and the laws affecting those institutions, saying they are simply not transparent.

Mr Anthony Effah, Member of the Finance Committee and MP for Asikuma Odoben-Brakwa reacting to the claims of the Minority stated that the government had spent about GHc 12 billion to pay the Micro Finance companies, Savings, and Loans and Finance Houses making up 92 percent of the clients of these institutions.

He explained that an additional GH¢ 3.1 billion had been allocated in the mid-year budget to pay the Fund Management Companies.

He noted that the BoG did not wake up one day to revoke the licenses of these financial institutions but had to follow certain procedures, saying, even the Security Exchange Commission (SEC) is still validating some claims.

Mr Effah also stated that for the Minority to request for an audit in the middle of transaction smacks of double standards, saying, it was the Auditor General that had the power to audit all the government transactions.

He maintained that the government of Ghana was the shareholder of the Consolidated Bank of Ghana.