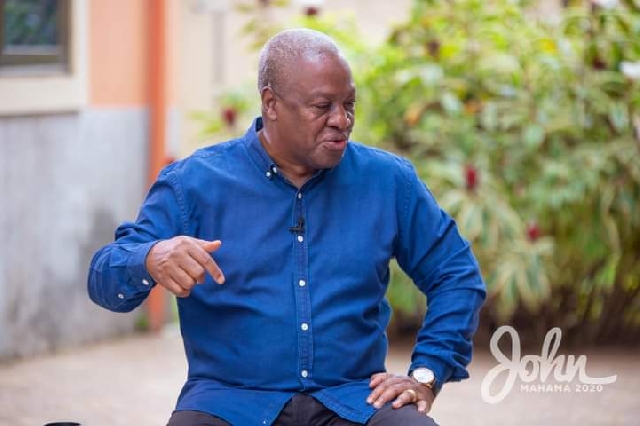 John Mahama
The voter ID card of Prof Naana Jane Opoku-Agyemang was duplicated and had to be replaced when she attempted verifying her details in the ongoing voter roll exhibition exercise, the flagbearer of the National Democratic Congress (NDC), Mr John Mahama, has revealed at a press conference in Accra on Thursday, 24 September 2020.

This follows reports that some voter ID cards had been found to have been duplicated, as registrants went to check their details.

Mr Mahama listed some constituencies in which the party had discovered the exclusion of the names of voters from the 2020 register.

According to Mr Mahama: “In Jirapa in the Upper West Region, a total of 2,057 names were nowhere to be found on the voter register at five centres. At Klottey Korle in the Greater Accra Region, 2,054 people who registered in some 12 centres did not find their names”.

“In Krowor, also in Greater Accra, cases of duplicated numbers were recorded in as many as eight centres and this affected 2,453 people.”

Mr Mahama continued: “In Ashaiman, the vigilance of our MP, honourable Ernest Norgbey and other NDC executives ensured the detection of the omission of over 21,000 names from the register including that of the MP.”

He, however, noted that the EC, in response to this, presented a new register with the name of the MP but was short of 7,000 more names and accused the MP of falsehood when it again presented another register with his name.

The NDC flagbearer continued: “In the Central Region, glaring cases of the duplication of card numbers were also recorded in 14 centres in the Komenda, Edina Aguafo Abirem Constituency and one of such cases involved my running mate Prof Jane Naana Opoku-Agyemang”.

“At Elmina, they took the old card from her and replaced it with a new card.

“Being who she is, she could make the trip to Elmina, but what of the poor farmer in the village who comes and finds out that their card is not valid?

“Are they going to travel to Elmina to replace the card?” Mr Mahama asked.

He noted, however, that even though the occurrence of anomalies is not new during the exhibition of a voter register, the anomalies with the 2020 register are a cause for alarm.

“The sheer value and magnitude of the recorded anomalies in this ongoing voter exhibition exercise are unusual and unprecedented and give us genuine cause for concern about the credibility of the register and the integrity of the electoral process,” Mr Mahama explained.