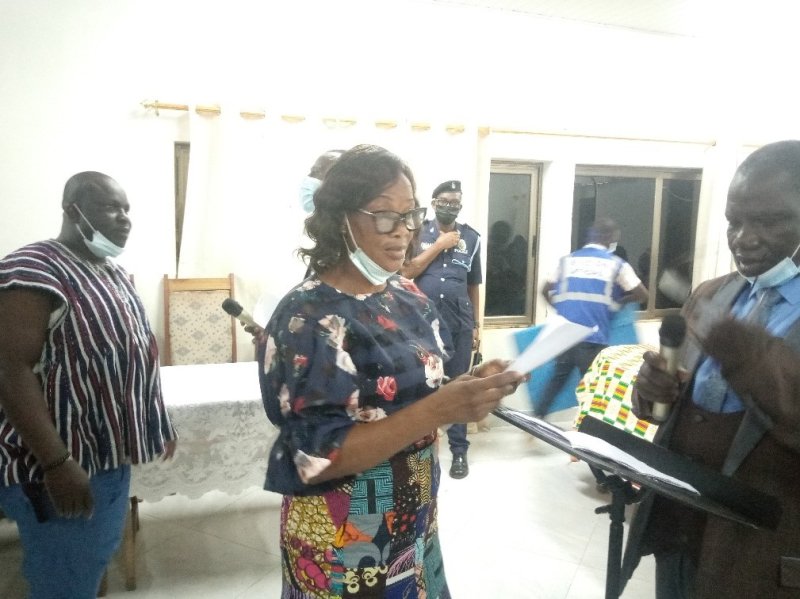 The Assembly Members of the Nabdam District Assembly of the Upper East Region has finally approved Mrs Agnes Anamoo’s renomination as the Chief Executive for the area through popular acclamation, after a second attempt.

Mrs Anamoo, the incumbent DCE, was renominated by President Akufo-Addo but was rejected by the Assembly Members during the first election on September 30, 2021.

The 19 Assembly Members, including 13 elected and six government appointees, agreed and confirmed Mrs Anamoo without going through voting.

Few minutes before the commencement of the election to approve the DCE nominee, Mr Zuure Sampana Abass, the Presiding Member of the Assembly, handed dismissal letters to two government appointees to the Assembly, Mr Francis Wognab and Mr Moses Deh.

The Presiding Member instantly handed appointment letters to Mr Thomas Kudoug and Mrs Veronica Barik to replace the sacked appointees and had them sworn in.

Mr Musah Assabigi, the Nabdam District Director of the Electoral Commission, who was present to conduct the election in response to the decision by the Assembly Members, said it was lawful that Members could agree to confirm the Nominee without voting.

Mrs Anamoo expressed gratitude to the President for reposing in her a duty to serve and thanked the Assembly Members for the gesture of unison and their confidence in her.

She said the days of the campaign were over and there was the need for them to work together to address the issues confronting the district.

“Electioneering campaigns are over and we need to close our ranks and work together to address issues of poverty, falling standard of education, water and sanitation, poor road infrastructure, alcoholism and teenage pregnancy, to enhance the livelihoods of our people,” she stated.

Mrs Anamoo, who described the occasion as the most humbling moment in her life, said she was going to justify the confidence placed in her.

“I consider the trust you have placed in me sacred and I will give my all to justify your confidence. It is a moment of honour and responsibility and there has never been a more humbling moment in my life than this.”