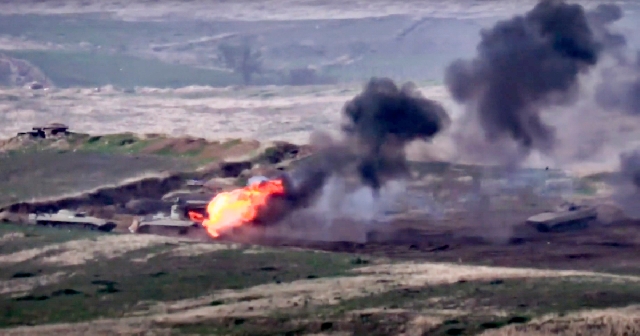 Battles between Armenian and Azerbaijan forces over the disputed region of Nagorno-Karabakh have continued overnight, as international calls for calm after the heaviest fighting between the two sides in years grew.

The clashes between the two former Soviet republics, which fought a war in the 1990s, were the latest flare-up of a long-running conflict over Nagorno-Karabakh, a breakaway region that is inside Azerbaijan but is run by ethnic Armenians.

Nagorno-Karabakh separatists said one Armenian woman and a child were killed, while Baku said that an Azerbaijani family of five died in shelling launched by Armenian separatists.

“We are tired of Azerbaijan’s threats, we will fight to the death to resolve the problem once and for all,” Artak Bagdasaryan, 36, told the AFP news agency in Yerevan, adding that he was waiting to be conscripted into the army.

Azerbaijan claimed it captured a strategic mountain in the region that helps control transport communications between Yerevan and the enclave.

The clashes prompted a flurry of diplomacy to reduce tension in a decades-old conflict amid fears the violence could spiral out of control.

“We are a step away from a large-scale war,” Olesya Vartanyan of the International Crisis Group told AFP.

“One of the main reasons for the current escalation is a lack of any proactive international mediation between the sides for weeks,” she added.

“We’re looking at it very strongly,” he told a news briefing. “We have a lot of good relationships in that area. We’ll see if we can stop it.”

The US State Department condemned the violence in a statement, calling for an immediate halt to hostilities and any rhetoric or other actions that could make the situation worse.

US Democratic presidential candidate and former Vice President Joe Biden said in a statement that hostilities could escalate into a wider conflict and urged the Trump administration to push for more observers along the ceasefire line and for Russia “to stop cynically providing arms to both sides”.

Nagorno-Karabakh broke away from Azerbaijan as the Soviet Union collapsed in 1991 after fighting that left 30,000 dead and forced many more from their homes.

Although a ceasefire was reached in 1994, Azerbaijan and Armenia frequently accuse each other of attacks around Nagorno-Karabakh and along the separate Azerbaijan-Armenia frontier.