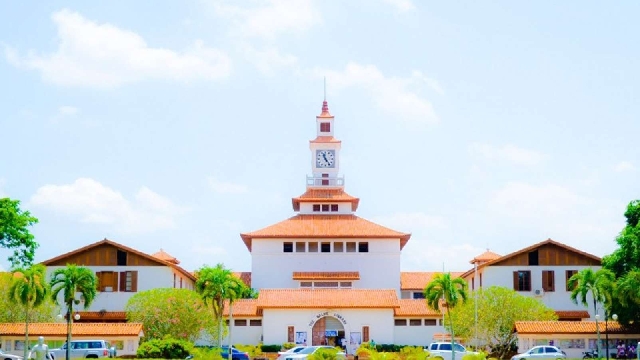 The national body of the University Teachers Association (UTAG) has said it will sanction the University of Ghana chapter of UTAG, UG-UTAG, for usurping the authority of the national executives in holding a press conference at which it called on the government to withdraw the Public Universities Bill from Parliament in its current form because it is “unconstitutional, unnecessary, and deeply harmful to the integrity of our public universities.”

Speaking to Class News on the matter, however, Dr Samuel Bert Boadu Kusi of the University of Cape Coast branch of UTAG, who spoke on behalf of the national body, said: “Why are they usurping the powers of the very body that they claim to be part of?”

“It is most unfortunate because UG is not the only campus that makes up the national body of UTAG”, Dr Boadu Kusi said.

According to him, the UG Chapter did the same thing in the past and apologised for it but has repeated it.

He told Valentina Ofori-Afriyie on Class91.3FM’s 505 news programme that in his view, UG-UTAG is “unnecessarily and unduly seeking attention”, which, according to him, “should not be so”.

At the contentious press conference, the UG Chapter called on President Nana Addo Dankwa Akufo-Addo to exercise his constitutional powers to have the Public Universities Bill (PUB) withdrawn.

UG-UTAG said the Bill “poses a threat to the ability of students, lecturers and administrators to carry out their day-to-day learning, teaching and research functions without fear of government dictates or reprisals.”

The Executive branch of the government has put before parliament a Bill that would, among many other things, allow the President to indirectly govern universities in Ghana by appointing the majority of the members of governing councils close down any university and replace its governing council; allow a Minister of Education to give directives to the universities on any matter with which the universities must comply, and take the process for admission of new students away from individual universities.

This Bill, UG-UTAG believes, poses a grave and imminent danger to democracy and higher education in the country.

Below is the full statement delivered by UG-UTAG:

Distinguished ladies and gentlemen of the local and international media: 2020 has been a difficult year and all Ghanaians are going through trying times. Given these circumstances, it is only a matter of the utmost urgency that would compel us to convene a gathering of this nature.

The University of Ghana branch of the University Teachers Association of Ghana (UG-UTAG) has invited you to this press conference to engage you on an issue that poses an imminent danger to our institutions of higher education and that has the potential to irreparably damage Ghana’s global standing as a pillar of democratic governance in Africa. The matter at stake is the Public University Bill (PUB) that purports to harmonize public universities under one law but that has disturbing implications for the future of higher education in Ghana.

UG-UTAG is made up of academics of diverse disciplines, of different ages and political persuasions. We want to stress that the PUB is not a partisan issue but one of national importance. We have, therefore, taken up this campaign on behalf of current and future students, lecturers, and staff of universities, and on behalf of the larger Ghanaian society that benefits from the work that we do.

For the sake of the listening public, a bit of background on the PUB. The Executive branch of the government has put before parliament a Bill that would, among many other things:

a) allow the President to indirectly govern universities in Ghana by appointing a majority of the members of governing councils;

b) allow the President to close down any university and replace its governing council;

d) take the process for admission of new students away from individual universities.

In an interview on the 4th of September 2020 on Oman FM, the President conceded that “valid criticisms” had been brought against the PUB and said that these would be reviewed. However, the President ultimately concluded that “the basic thrust of the Bill and the rationale for it is incontestable”. With this press conference, UG-UTAG is, in fact, contesting the very basis of the Bill and calling for it to be completely withdrawn.

In sum, our objections are that the PUB is unconstitutional, unnecessary, and will create more problems than it claims to solve.

First and foremost, the PUB violates the 1992 Constitution of our Republic. If passed into law, this new legislation would confer on the President powers that the 1992 Constitution explicitly denies him or her under Articles 68(1)(b) and 195(3). Through provisions in the Bill that give the Executive majority representation on the University Council and that allow the President to dissolve the Council, the President would effectively control universities. The new law would thus erode the protections that the Constitution grants universities in order that they can effectively carry out their mandate of teaching, learning, and research; academics would become beholden to the political party in power, either as a result of direct interference or through self-censorship, and would cease to be the source to which the media and public can turn for impartial analysis of government policies.

Although in the interview on Oman FM the President did concede that the issue of University Councils required a second look, he did not indicate whether these clauses would be totally removed or merely tweaked. In any case, there are many more problems with the Bill that make it untenable.

Second, the PUB is unnecessary. Public universities are already accountable to all three branches of government (the Executive, Legislature and Judiciary) through a large number of laws and institutions. The PUB seeks to attain by legal meddlesomeness what can already be achieved by enforcing existing laws and laid down administrative procedures, and by ensuring that the regulatory institutions do their job. Where there have been any cases of wrongdoing, it behoves the state to proceed with investigations and, if necessary, bring charges to bear. The PUB is yet another instance of the government introducing a new law rather than ensuring that existing laws work as they should.

Third, the Bill will do more harm than it claims to fix. Having a one-size-fits-all piece of legislation for our diverse and unique universities will inhibit innovation. Let us not forget that, among other achievements, our public universities have turned out leading professionals in all fields and have produced innovative research, perhaps none felt as profoundly as during our current battle with Covid-19. These achievements have been in spite of dwindling subventions from the state over the years.

In addition, the Bill states that the Minister of Education can direct or must approve the following: the establishment of any new academic units; any relationship with academic and non-academic entities; all research collaborations; and all financial matters, including the leasing or sale of university properties.

In effect, the law would allow one person—the Minister of Education – to make decisions that currently go through due consideration by a number of institutionalized bodies, including the University Councils.

Again, by seeking to centralize University admissions under one platform, the Bill takes the process for admission of new students away from individual universities. This would not only be cumbersome but would strip from universities the ability to seek the best students for their unique programmes. Centralized admission, under the control of the government, would conceivably lead to pervasive nepotism and the expansion of ‘protocol admissions’, deepening the disadvantage of students without means or political connection.

To conclude, the PUB is unconstitutional, unnecessary, and deeply harmful to the integrity of our public universities. It poses a threat to the ability of students, lecturers and administrators to carry out their day-to-day learning, teaching and research functions without fear of government dictates or reprisals.

We urge the President of the Republic, Nana Addo Dankwa Akufo-Addo, to exercise his constitutional powers to have the PUB withdrawn.

To drive home this message, we will present, at an opportune time, a petition that has garnered over 2,700 signatures from concerned academics, students and members of the public in Ghana and all around the world.

We are also ramping up our media campaign to make sure that the public understands fully the dangers of the PUB. Our fight against the PUB has drawn the attention of the international press and other organizations that are concerned about the integrity of higher education. You will continue to see articles on the PUB come out in the international media.

We are further internationalizing our struggle by drawing on the support of organizations such as the Ghana Studies Association and the African Studies Association of Africa, the latter headquartered in Ghana. These are associations of scholars from Ghana and all over the world who have a professional interest in Ghana and Africa. Both associations have put out strong statements against the unwarranted control that the Bill gives to the Executive arm of government.

We also stand today with the Centre for Democratic Development-Ghana (CDD-Gh) and the Institute for Democratic Governance (IDEG), both of which submitted memos to parliament critiquing the Bill.

These highly respected organizations are hardly the only ones to offer sober objections to the PUB. The Ghana Academy of Arts and Sciences, a body of our most respected scientists, has described the Bill as “dangerous”, “retrogressive”, “poorly motivated” and “unjustified”.

We assure the Ghanaian public that UG-UTAG will not relent in its opposition to this harmful Bill and in its campaign to preserve the independence of Ghana’s higher education, for the sake of posterity.

We thank the media for your presence this morning. We are deeply grateful.