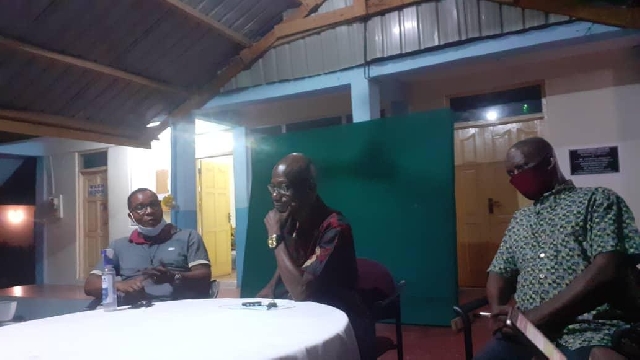 A member of the opposition National Democratic Congress (NDC) in charge of the party’s special duties in the Volta Region, Mr Nkude Manfred has met and rendered an apology to the executives and members of the Ghana Journalists Association (GJA) in the region.

Regional members of the association and some key media personnel were abandoned at their press centre on Wednesday evening, 19 August 2020, after a botched meeting with the flagbearer of the NDC, Mr John Mahama.

The journalists were informed about the cancellation of the meeting after waiting for the former President and his delegation for more than three hours, leaving the attendees disappointed.

At a brief meeting held on Friday, 28 August 2020, in Ho, Mr Nkude said: “When I heard what transpired between our party and the media last week, I was not comfortable, so, I said I must meet my friends [the media] and apologise”.

He noted that the apology was “on my own behalf”, adding that he has not met the association for any political reasons. “I’m just here to talk to my friends in the media and to just say we are sorry for what happened during the old man’s visit.”

Mr Nkude further indicated that he needed no one’s permission to carry out his duty.

“I don’t need to seek any permission from anybody, I think I’m just carrying out my duty as a director for special duties for the party, once whatever I do, I think it will inure to the benefit of the party, I think I must do it,” he said.

Together with a former party organiser and member of the council of elders of the party, Mr Michael Gamor, journalists in the region were implored to let bygones be bygones with a promise that the mishap will not be repeated.

The Volta regional Chairman of the GJA, Mr Kafui Bells Kanyi said although the journalists were disappointed, the former President had also lost an opportunity because the media is critical in times of elections.

“We felt disappointed and humiliated by the incident but we think that the party and the flagbearer have also lost a very important opportunity to interact with the media because the media and media practitioners influence elections and political systems a lot,” he noted.

He also emphasised that the association holds nothing against the NDC, saying: “For us, well, we’ve moved on, we don’t have any enemy, we are ready to work with everybody and anybody.”

Mr Kanyi further advised that journalists should not be taken for granted “because we are serious people and we want to be treated as professionals.”