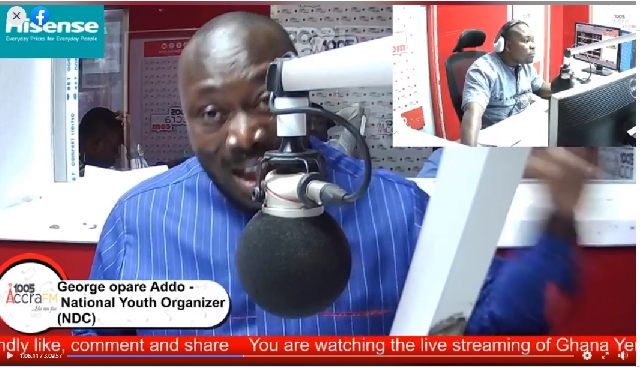 The next government of the National Democratic Congress (NDC) will create Okada-only lanes if need be to accommodate the anticipated increase in commercial motorbike operators and the attendant traffic consequences should the party win the 7 December 2020 polls and Okada is legalised as promised by former President John Mahama, the party’s National Youth Organiser, Mr George Opare Addo has said.

He told Kwabena Prah Jr on Accra100.5FM’s morning show Ghana Yensom on Wednesday that: “In Holland, an advanced democracy, even bicycles are given lanes”.

“We created lanes for the bus rapid system”, so, “if it becomes necessary and it becomes a part of our lives, we will find ways of making sure that there will be lanes purposely designated [to Okada]”, Mr Opare Addo noted.

He said: “We may not be able to do all entirely but in places where the patronage is very high, the government is made to provide solutions to problems, so, if that becomes a problem and it becomes needful that we provide lanes for motorbikes, we must find ways of providing it and that is part of the consultations that will go on and we will regulate it and make sure it is safe”.

In August this year, the flagbearer of the NDC said he will legalise the Okada business in his next administration.

Speaking to the chiefs, people and party supporters at Kpando in the Volta Region on Friday, 21 August 2020, Mr Mahama said: “I’ve been seeing young people who have finished school and they can’t find a job and, so, they are look for something they can do and many of our young people are riding motorcycles and transporting people from place to place, and we call them Okada”.

Okada serves as the main means of transportation for so many communities in the remotest and rural parts of the country such as northern Ghana, even though they are also popular in the big cities due to the convenience they afford users in terms of beating traffic.

It has been the source of livelihood for many people in the country.

For instance, Alhaji Tijani Umar, an Okado operator, told Class91.3FM a few months ago that he feeds his four wives and 16 children from that business.

Speaking in an interview with Benjamin Akakpo on the Executive Breakfast Show (EBS) on Class91.3FM on Thursday, 9 January 2020, Alhaji Tijani, who plies his business at Ashaiman in the Greater Accra Region, described the Okada business as an important source of livelihood for the sustenance of his family.

“I’ve four wives, 16 children. Formerly, I was a scrap dealer… and everything was not going [on well]; if I didn’t join the Okada [business], I cannot feed them [family].

“My family knows that I’m an Okada rider. I even have one adopted daughter at Legon, I visit her always with my Okada and her friends laugh at her that her father is an Okada man but I know what I’m getting, I know what I’m fetching, Okada is a good business”, he told Benjamin Akakpo.

According to Alhaji Tijani, Sundays are the best days for the Okada business.

Alhaji Tijani has been an Okada rider for seven years and makes GHS1,000 a month from it.

Ghana’s Road Traffic Regulations 2012 (L.I 2180) prohibit the use of tricycles and motorbikes for commercial purposes.