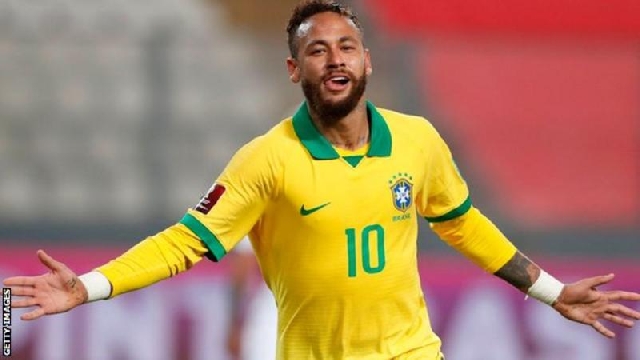 Neymar moved second behind Pele in Brazil’s all-time leading scorer list by scoring a hat-trick in their 2022 World Cup qualifying win over Peru.

The Paris St-Germain forward scored his 64th international goal when he tapped in late on to complete a 4-2 win.

Peru twice took the lead in Lima but Neymar scored two penalties to take his tally above Ronaldo, with Pele on 77.

Neymar, 28, has scored his goals in 104 international appearances, while Pele played 92 times for his country.

Brazil and Argentina lead the group after winning both of their opening matches while Paraguay, who beat Venezuela 1-0 on Tuesday, are third.

The top four from the 10-team group qualify directly for Qatar with the fifth-placed side going into an inter-confederation play-off.