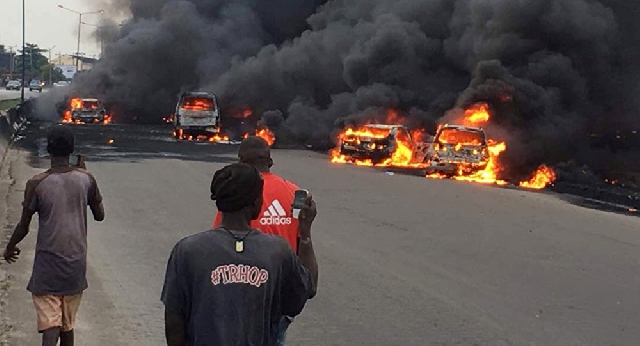 Bystanders look on at the vehicles on fire.

At least 23 people were killed after a petrol tanker overturned and caught fire on a busy road in Nigeria’s central state of Kogi.

The tanker lost control and rammed into five cars, three tricycles and two motorcycles on the Lokoja-Abuja highway on Wednesday.

It reportedly fell on one of the five cars carrying a family, crushing them to death before bursting into flames, local media reported.

Kogi State Sector Commander of the Federal Road Safety Corp Idris Fika Ali confirmed that 23 people were killed in the explosion while one child survived with injuries.

He went on to say that the occupants of the 10 vehicles involved have been killed.

“The death of 23 people as confirmed by the Federal Road Safety Commission, represents another disturbing and saddening incident in the litany of tragedies that have befallen our country,” President Muhammadu Buhari said in a statement.

“I am seriously worried about the frequency of these unfortunate and large scale tragedies in the country which cause needless deaths,” he added.

Bisi Kazeem, a spokesman for the Federal Road Safety Corps (FRSC), said nine children were involved in the accident, which happened opposite a petrol station along the highway.

Traffic accidents are common in Nigeria, where roads are ill-maintained and safety standards poor.